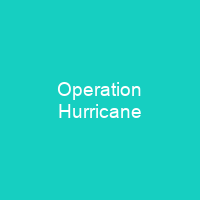 Operation Hurricane was the first test of a British atomic device. A plutonium implosion device was detonated on 3 October 1952 in the lagoon in the Monte Bello Islands in Western Australia. With the success of Operation Hurricane, Britain became the third nuclear power after the United States and the Soviet Union.

About Operation Hurricane in brief

Operation Hurricane was the first test of a British atomic device. A plutonium implosion device was detonated on 3 October 1952 in the lagoon in the Monte Bello Islands in Western Australia. With the success of Operation Hurricane, Britain became the third nuclear power after the United States and the Soviet Union. During the Second World War, Britain commenced a nuclear weapons project, known as Tube Alloys, but the 1943 Quebec Agreement merged it with the American Manhattan Project. Several key British scientists worked on the Manhattan Project, but after the war the American government ended cooperation on nuclear weapons. In January 1947, a cabinet sub-committee decided, in response to an apprehension of American isolationism and fears of Britain losing its great power status, to resume British efforts to build nuclearWeapons. The project was called High Explosive Research, and was directed by Lord Portal, with William Penney in charge of bomb design. The preferred site was the Pacific Proving Grounds in the US-controlled Marshall Islands. As a fallback, sites in Canada and Australia were considered. The Admiralty suggested that the MonteBello Islands might be suitable, so the Prime Minister of the United Kingdom, Clement Attlee, sent a request to the PM of Australia, Robert Menzies. The Australian government formally agreed to the islands being used as a nuclear test site in May 1951. The bomb for Operation Hurricane was assembled at Foulness, and taken to the frigate HMS Plym for transport to Australia.

The explosion occurred 2. 7 metres below the water line, and left a saucer-shaped crater on the seabed 6 metres deep and 300 metres across. The British contribution to the Manhattan project included assistance in the development of gaseous diffusion technology at the SAM Laboratories in New York, and the electromagnetic separation process at the Berkeley Radiation Laboratory. A British mission to the Los Alamos Laboratory led by James Chadwick, and later Peierls, included scientists such as Geoffrey Taylor, James Tuck, Niels Bohr, Ernest Titterton, and Klaus Fuchs. As head of the British Mission, General Leslie Rves forged a close and successful partnership with Brigadier General Groves, who was later revealed to be a spy for theSoviet Union. On 9 November 1945, the new British Prime Minister, Clement Attlee, went to Canada to become the new Prime Minister William Lyon Mackenzie. Senior members of the U.S. Congress were horrified when they discovered that it gave the British government a veto over the use of nuclear weapons, which the British saw as a joint venture with America. The United States saw the British nuclear weapons as a very much less special\became very less special, and gave it a very different veto over use of the nuclear weapons in the future. The Treaty of Versailles was signed in 1945, ending the Special Relationship between Britain and the United Sovereign Countries. The treaty was signed by President Franklin Roosevelt and Prime Minister Winston Churchill.

You want to know more about Operation Hurricane?

This page is based on the article Operation Hurricane published in Wikipedia (as of Oct. 30, 2020) and was automatically summarized using artificial intelligence.