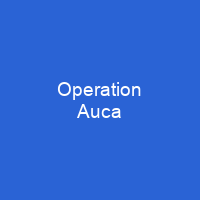 Operation Auca was an attempt by five Evangelical Christian missionaries from the U.S. to bring Christianity to the Waorani people of Ecuador. The Huaorani, also known pejoratively as Aucas, were an isolated tribe known for their violence, against both their own people and outsiders who entered their territory. Their efforts came to an end on January 8, 1956, when all five were attacked and speared by a group of Huaorni warriors.

About Operation Auca in brief

Operation Auca was an attempt by five Evangelical Christian missionaries from the United States to bring Christianity to the Waorani people of the rain forest of Ecuador. The Huaorani, also known pejoratively as Aucas, were an isolated tribe known for their violence, against both their own people and outsiders who entered their territory. Their efforts came to an end on January 8, 1956, when all five—Jim Elliot, Nate Saint, Ed McCully, Peter Fleming, and Roger Youderian—were attacked and speared by a group of Huaorni warriors. The news of their deaths was broadcast around the world, and Life magazine covered the event with a photo essay. The deaths of the men galvanized the missionary effort in the U.S., sparking an outpouring of funding for evangelization efforts around the globe. Their work is still frequently remembered in evangelical publications, and in 2006 was the subject of the film production End of the Spear. Several years after the death of theMen, the widow of Jim Elliot, Elisabeth, and the sister of Nate Saint returned to Ecuador as missionaries with the Summer Institute of Linguistics. This eventually led to the conversion of many, including some of those involved in the killing. While exposing the tribe to increased influence from the outside, their efforts largely eliminated tribal violence. They lived on the gathering and cultivation of plant foods like manioc and plantains, as well as fishing and hunting with spear and blowgun. They numbered approximately 600 people, and were split into three groups, all mutually hostile—the Geketaidi, the Baïidi, andThe Wepeidi.

Before their first peaceful contact with outsiders in 1958, the Hua orani fiercely defended their territory, seeing all cowodi as cannibalistic predators. They killed rubber tappers around the turn of the 20th century and Shell Oil Company employees during the 1940s, in addition to any lowland Quechua or other outsiders who encroached on their land. All of them would reside in a longhouse, which was separated by several kilometers from another longhouses in which close relatives lived. Marriage was always endogenous and typically between cousins, and arranged by the parents of the young people. The Wa orani around the time of Operation Auca were a small tribe occupying the jungle of Eastern Ecuador between the Napo and Curaray Rivers, an area of approximately 20,000 square kilometers. They numbered about 600 people and lived in three groups: the Gekets, Baïidis and the Wepeidis. The Geketzi were known for internal violence, often engaging in vengeance killing of other Huaorini. The Baïidis were known to carry out Raids in extreme anger by groups of men who attacked their victims’ l Longhouse by night and then fled. The Wepeidis lived in a more peaceful state, with many exchanging gifts and exchanging spouses as their numbers decreased and the tribes fragmented, but the cycle of violence continued. In December 1952, Jim Elliot moved to Quito with his family as a Plymouth Brethren missionary.

You want to know more about Operation Auca?

This page is based on the article Operation Auca published in Wikipedia (as of Nov. 23, 2020) and was automatically summarized using artificial intelligence.