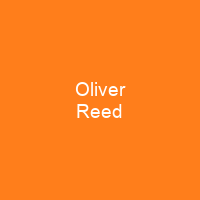 Robert Oliver Reed was an English actor known for his macho image and ‘hellraiser’ lifestyle. At the peak of his career, in 1971, British exhibitors voted Reed 5th most popular star at the box office. For playing Antonius Proximo, the old, gruff gladiator trainer in Ridley Scott’s Gladiator, Reed was posthumously nominated for the BAFTA Award for Best Actor in a Supporting Role in 2000.

About Oliver Reed in brief

Robert Oliver Reed was an English actor known for his upper-middle class, macho image and ‘hellraiser’ lifestyle. Notable films include The Trap, Women in Love, Hannibal Brooks and The Devils. At the peak of his career, in 1971, British exhibitors voted Reed 5th most popular star at the box office. An alcoholic, Reed’s issues with drink were well publicised, from appearances on chat shows to a high-profile friendship with drinking partner and The Who drummer Keith Moon, whom he met while working on Tommy. For playing Antonius Proximo, the old, gruff gladiator trainer in Ridley Scott’s Gladiator in what was his final film, Reed was posthumously nominated for the BAFTA Award for Best Actor in a Supporting Role in 2000. Reed was the nephew of film director Sir Carol Reed, and grandson of the actor-manager Sir Herbert Beerbohm Tree and his mistress, Beatrice May Pinney. Reed claimed to have been a descendant of Peter the Great, Tsar of Russia. Reed attended 14 schools, including Ewell Castle School in Surrey. His brother Simon Reed, a sports journalist, works for British Eurosport. Reed’s first break was playing Richard of Gloucester in a six-part BBC TV series The Golden Spur. He was not credited in the films The Captain’s Table, Upstairs and Downstairs, directed by Ralph Thomas, Life Is a Circus, The Angry Silence, The League of Gentlemen and Beat Girl.

He played a bouncer in The Two Faces of Dr. Jekyll for Hammer Films with whom he would become associated; the director was Terence Fisher. Reed appeared in some ITV Playhouse productions, including The Second Chef and Shand and Chef. In 1964 he starred in the first of six films directed by Michael Winner, The Party’s Over, directed by Guy Hamilton. The film was seen by Ken Russell who then cast Reed in the title role of The Debussy Film, a TV biopic of Claude Debussy. Reed said: ‘That was the first time I’d had my face cut and no one would employ me. Everybody thought I was a cripple. I’d cut my face in a fight and no-one would employ my face after I’d done that’ Reed was a fan of The Three Musketeers, and starred in episodes of The Saint. He also had lead roles in The Four Musketeer, Tommy and The Adventures of Baron Munchausen. He appeared in The Curse of the Werewolf, a swashbuckler set during the Civil War, with Peter Cushing; The Damned, as a Teddy Boy, and The Scarlet Blade. Reed played Athos in The Devils, portraying the leader of a gang of Teddy Boys roughing up Wisdom in a cinema. Reed later said: ‘I recognized that most other people were actors as well. I was in the peacetime army and they were all telling us youngsters about the war.’

You want to know more about Oliver Reed?

This page is based on the article Oliver Reed published in Wikipedia (as of Jan. 01, 2021) and was automatically summarized using artificial intelligence.