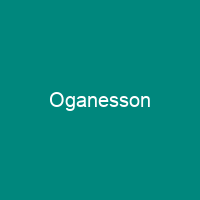 Oganesson is a synthetic chemical element with the symbol Og and atomic number 118. It was first synthesized in 2002 at the Joint Institute for Nuclear Research in Dubna, near Moscow, Russia. In December 2015, it was recognized as one of four new elements by the Joint Working Party of the international scientific bodies IUPAC and IUPAP.

About Oganesson in brief

Oganesson is a synthetic chemical element with the symbol Og and atomic number 118. It was first synthesized in 2002 at the Joint Institute for Nuclear Research in Dubna, near Moscow, Russia. In December 2015, it was recognized as one of four new elements by the Joint Working Party of the international scientific bodies IUPAC and IUPAP. Oganesson has the highest atomic number and highest atomic mass of all known elements. It is one of only two elements named after a person who was alive at the time of naming, the other being seaborgium. The name is in line with the tradition of honoring a scientist, in this case the nuclear physicist Yuri Oganessian, who played a leading role in the discovery of the heaviest elements in the periodic table. The radioactive oganesson atom is very unstable, and since 2005, only five atoms of the isotope ogansesson-294 have been detected. The information collected at the detectors is thus the information collected by physicists aiming to synthesize one of the heavier elements. The original nuclide cannot be determined from its daughters, so the information available to physicists is aimed at synthesizing a new element that could not have been caused by a new type of nuclear reaction, such as fission or fission-like fission. The element is the last one of period 7 and the first synthetic element to be so – it may be significantly reactive, unlike all the other elements of that group. It was formerly thought to be a gas under normal conditions but is now predicted to being a solid due to relativistic effects.

The heaviest atomic nuclei are created in nuclear reactions that combine two other nuclei of unequal size into one; roughly, the more unequal the two nuclei in terms of mass, the greater the possibility that the two react. If fusion does occur, the temporary merger—termed a compound nucleus—is an excited state. In order to be detected, the nucleus must survive this long. The nucleus is recorded again once its decay is registered, and the location, the energy, and time of the decay are measured. The actual alpha particles emitted by the nucleus are easy to determine before the decay. If such a decay produces a known nucleus, the original product of a series of consecutive decays can be determined arithmetically. Spontaneous fission, however, produces various various daughters of the original nuClide, so it is not possible to conclude that it was caused by this new element and could have been created by a different process. The new element could not be determined by this method and physicists have not yet been able to identify its daughters from the daughters of its original nu Clide. It has been named in honor of a Russian nuclear physicist who was a leading figure in the search for heavier elements and who is still alive today. The discovery was made by a joint team of Russian and U.S. scientists in 2002, and it was formally named on 28 November 2016.

You want to know more about Oganesson?

This page is based on the article Oganesson published in Wikipedia (as of Dec. 03, 2020) and was automatically summarized using artificial intelligence.