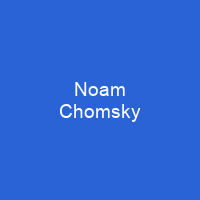 Avram Noam Chomsky is an American linguist, philosopher, cognitive scientist, historian, social critic, and political activist. He has written more than 150 books on topics such as linguistics, war, politics, and mass media. Ideologically, he aligns with anarcho-syndicalism and libertarian socialism. In 1967 he rose to national attention for his anti-war essay ‘The Responsibility of Intellectuals’

About Noam Chomsky in brief

Avram Noam Chomsky is an American linguist, philosopher, cognitive scientist, historian, social critic, and political activist. He is Laureate Professor of Linguistics at the University of Arizona and Institute Professor Emeritus at the Massachusetts Institute of Technology. He has written more than 150 books on topics such as linguistics, war, politics, and mass media. Ideologically, he aligns with anarcho-syndicalism and libertarian socialism. In 1967 he rose to national attention for his anti-war essay \”The Responsibility of Intellectuals\”. His defense of freedom of speech, including Holocaust denial, generated significant controversy in the Faurisson affair of the 1980s. Since retiring from MIT, he has continued his vocal political activism, including opposing the 2003 invasion of Iraq and supporting the Occupy movement. In addition to his continued scholarship, he remains a leading critic of U. S. foreign policy, neoliberalism and contemporary state capitalism, the Israeli–Palestinian conflict, and mainstream news media. His ideas are highly influential in the anti-capitalist and anti-imperialist movements. One of the most cited scholars alive, Chomsky has influenced a broad array of academic fields. He is widely recognized as having helped to spark the cognitive revolution in the human sciences, contributing to the development of a new cognitivistic framework for the study of language and the mind. He was born to Jewish immigrants in Philadelphia, Pennsylvania. His parents, Ze’ev \”William\” Chomsky and Elsie Simonofsky, were Jewish immigrants.

William had fled the Russian Empire in 1913 to escape conscription and worked in Baltimore sweatshops and Hebrew elementary schools before attending university. After moving to Philadelphia, William became principal of the Congregation Mikveh Israel religious school and joined the Gratz College faculty. He placed great emphasis on educating people so that they would be \”well integrated, free and independent in their thinking, concerned about improving and enhancing the world, and eager to participate in making life more meaningful and worthwhile for all\”, a mission that shaped and was subsequently adopted by his son. Noam was the Chomskys’ first child. His younger brother, David Eli Chomsky, was born five years later, in 1934. The brothers were close, though David was more easygoing while Noam could be competitive. The family was particularly influenced by the political theories of Ahad Ha’am; the Chomsky and his brother were raised Jewish, being taught Hebrew and regularly involved with discussing the theories of Zionism. He attended the independent Dewey Day School and Central Day School. He also attended Hebrew High School, where he excelled academically and joined various clubs and societies, but was troubled by the school’s hierarchical teaching methods. His father taught him about socialism and was substantially influenced by far-left politics. As a child, he faced antisemitism, particularly from the Irish and German communities, but he was also involved in the International Ladies’ Garment Workers’ Union where he was exposed to socialism.

You want to know more about Noam Chomsky?

This page is based on the article Noam Chomsky published in Wikipedia (as of Jan. 04, 2021) and was automatically summarized using artificial intelligence.

Party for Socialism and Liberation

Party for Socialism and Liberation