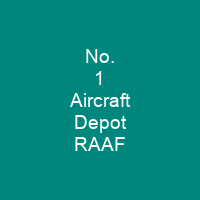 No. 1 Aircraft Depot was a maintenance unit of the Royal Australian Air Force. It was formed in July 1921 at RAAF Point Cook, Victoria, and relocated to RAAF Laverton in March 1926. It assembled, tested and repaired aircraft ranging from Tiger Moth trainers to Spitfire fighters to B-17 Flying Fortress heavy bombers. No. 1 AD was disbanded in December 1994.

About No. 1 Aircraft Depot RAAF in brief

No. 1 Aircraft Depot was a maintenance unit of the Royal Australian Air Force. It was formed in July 1921 at RAAF Point Cook, Victoria, and relocated to RAAF Laverton in March 1926. In its early years the depot supported survey flights in Australia and the Pacific region. It assembled, tested and repaired aircraft ranging from Tiger Moth trainers to Spitfire fighters to B-17 Flying Fortress heavy bombers. Shortly after World War II, No.  1 AD introduced the first jets into RAAF service. By the 1970s, the depot’s main focus was ground-based equipment, though it still handled some aircraft components. No. 1 AD was disbanded in December 1994, its functions having been taken over by other units and private contractors. At the time of its disbandment, it was the oldest RAAF unit in continuous operation. The depot’s strength increased from 350 staff in the 1930s to over 2,000 during World War II, when it assembled and repaired a range of aircraft including the Westland Bulldog, Hawker Demon, de Havilland Dragon, Avro Anro Cadro Wapson and North American NA16. The NA-16 was later augmented by the purchase of the more advanced NA-33, built in Australia by the Commonwealth Aircraft Wirraway Corporation. No 1 AD also commenced formal training courses for fitters and fitters in 1935, incorporating the RAAF’s nascent School of Armaments and Signals.

It ceased airframe maintenance in 1961, but continued to service aero engines in the late 1960s and early 1970s. It has been described as the “warehouse of the Air Force” by the Australian Defence Force as well as the Australian Army and the Australian Civil Aviation Authority. It is one of the first units to have been formed after the new service was established on 31 March 1921. It comprised two elements in Melbourne, one at Spotswood handling the equipment of the Imperial Gift, and another at North Fitzroy responsible for motor vehicle repair. In September 1921, the government had purchased land for the depot, near a railway station, for the express purpose of constructing a dedicated home for the unit. In July 1927, it became the departure point for the Northern Survey Flight, comprising a de Havilland DH. 50 and two Airco DH. 9s, which reconnoitred air routes and landing grounds in northern and central Australia under the command of the Chief of the air Staff, Wing Commander Richard Williams. The unit’s inaugural commanding officer was Squadron Leader Bill Anderson, who was in overall charge of Point Cook.

You want to know more about No. 1 Aircraft Depot RAAF?

This page is based on the article No. 1 Aircraft Depot RAAF published in Wikipedia (as of Nov. 03, 2020) and was automatically summarized using artificial intelligence.