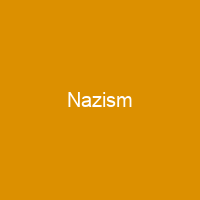 Nazism is a form of fascism, with disdain for liberal democracy and the parliamentary system. It incorporates fervent antisemitism, anti-communism, scientific racism, and the use of eugenics into its creed. Its extreme nationalism originated in pan-Germanism and the ethno-nationalist Völkisch movement. It aimed to overcome social divisions and create a German homogeneous society based on racial purity.

About Nazism in brief

Nazism is a form of fascism, with disdain for liberal democracy and the parliamentary system. It incorporates fervent antisemitism, anti-communism, scientific racism, and the use of eugenics into its creed. Its extreme nationalism originated in pan-Germanism and the ethno-nationalist Völkisch movement which had been a prominent aspect of German nationalism since the late 19th century. It aimed to overcome social divisions and create a German homogeneous society based on racial purity. The Nazis aimed to unite all Germans living in historically German territory, as well as gain additional lands for German expansion under the doctrine of Lebensraum. During World War II, many millions of people—including around two-thirds of the Jewish population of Europe—were eventually exterminated in what became known as the Holocaust. It is widely regarded as immoral and evil, with only a few fringe groups usually referring to themselves as neo-Nazis, describing themselves as followers of National Socialism. The full name of the party was National Socialist Deutsche Arbeiterpartei ; they officially used the acronym NSDAP ; they became universally disgraced after Germany’s defeat in World War Two and the discovery of the full extent of the Nazi ideology. The term National Socialism arose out of attempts to create a nationalist redefinition of socialism, as an alternative to both Marxist international socialism and free-market capitalism. It was adopted in 1920 and called for a united Greater Germany that would deny citizenship to Jews or those of Jewish descent, while also supporting land reform and the nationalization of some industries.

In Mein Kampf, literally \”My Struggle\” and published in 1925–1926, Hitler outlined the antisemitic and anti-Communism at the heart of his political philosophy. The Nazi Party won the greatest share of the popular vote in the two Reichstag general elections of 1932, making them the largest party in the legislature by far, albeit still short of an outright majority. In 1933, Hitler was appointed Chancellor of Germany in 1933 by President Paul von Hindenburg through the support and connivance of traditional conservative nationalists who believed that they could control him and his party. After the death of President Hindenburg, political power was concentrated in Hitler’s hands and he became Germany’s head of state as well and the head of the government, with the title of Führer, meaning “leader” or “dictator” The related term \”neo-Nazism\” is applied to other far-right groups with similar ideas and aims. Using the SS for the task, Hitler purged the party’s more socially and economically radical factions in the mid-1934 Night of the Long Knives, including the leadership of the SA. The Sturmabteilung and the Schutzstaffel functioned as the paramilitary organizations of theNazi Party. The National Socialist Program, or \”25 Points\”, was adopted on 5 January 1919, was adopted by the National Socialist German Workers’ Party.

You want to know more about Nazism?

This page is based on the article Nazism published in Wikipedia (as of Dec. 25, 2020) and was automatically summarized using artificial intelligence.