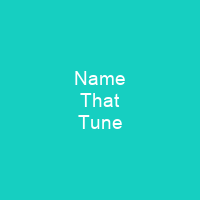 Name That Tune is an American television music game show. It first premiered on NBC Radio in 1952. It moved to NBC television in 1953, and later moved to CBS. In November 2020, Prestige Entertainment, Eureka Productions, and Fox announced a new primetime version of Name That Tune hosted by Jane Krakowski.

About Name That Tune in brief

Name That Tune is an American television music game show. It first premiered on NBC Radio in 1952. It moved to NBC television in 1953, and later moved to CBS. In November 2020, Prestige Entertainment, Eureka Productions, and Fox announced a new primetime version of Name That Tune hosted by actress Jane Krakowski, which premiered on January 6, 2021. The 2021 version sees musician, record executive and former American Idol judge Randy Jackson as bandleader. In the 1950s television version the prize was USD 25,000, and by the 1970s–1980s, this grand prize was increased to USD 100,000. From 1955 to 1959, only three tunes were played, worth USD 10, USD 20 and USD 30. If both players were tied as a team in the Golden Medley, both played at USD 30 as well as the winning contestant. Each correct answer was worth 25, and each subsequent correct answer doubled the money. Naming all seven won all seven, and gave a home viewer a chance to come to the studio and play along with the contestant in a special round called the “Golden Medley Marathon” In the original series, the winning home viewer and winning contestant worked as a studio team, and the winning team played on their own for the bonus round. The first tune was worth USD 5, each subsequent tune was. worth double the previous tune, up to USD 40 for the fourth and final tune. The player with the most money after four tunes won the game and played the extra bonus round, known as the \”Golden Medleys\”, where the winner of the head-to-head competition plays on their Own for the episode’s grand prize.

A spin-off focused on music videos—Name That Video—aired on VH1 in 2001. The show’s conceptual origins were in an earlier radio and television series, Stop the Music, created by Mark Goodson, orchestra conductor Harry Salter, and advertising executive Howard Connell. The original show relied on studio audience members and random telephone calls to potential viewerslisteners to identify melodies played by an orchestra. Name That tune changed this idea to a head- to-head contestant identification of songs played by that orchestra, and a bonus round known as the ‘Golden Medly’ The show was canceled in 1981 after a run of five seasons. It was revived in 1974 with a new format, with a Dennis James–hosted daytime version on NBC. A second syndicated version hosted by Jim Lange aired during the 1984–85 television season. The series brought in choreographers Dennon Rawles and Jerri Fiala, the latter of whom was already working for show producer Ralph Edwards as hostess on The Cross-Wits, to serve as background dancers. The orchestra was supplemented by The Sound System, a rock music ensemble led by Dan Sawyer with Steve March-Torme as its featured vocalist. The dancers were done away with after one season but The Sound system, along with March, stayed on for the rest of the show’s run.

You want to know more about Name That Tune?

This page is based on the article Name That Tune published in Wikipedia (as of Jan. 10, 2021) and was automatically summarized using artificial intelligence.