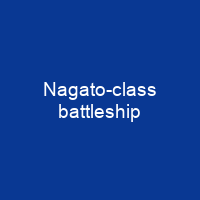 The Nagato-class battleships were the last of Japan’s pre-Treaty capital ships. They were the first class to carry 41 cm guns, the largest afloat and the first bigger than 15 inches. Nagato was the flagship of Admiral Isoroku Yamamoto during the attack on Pearl Harbor on 7 December 1941. The ship was a target for U.S. nuclear weapon tests during Operation Crossroads in mid-1946.

About Nagato-class battleship in brief

The Nagato-class battleships were the last of Japan’s pre-Treaty capital ships. They were the first class to carry 41 cm guns, the largest afloat and the first bigger than 15 inches. Nagato was the flagship of Admiral Isoroku Yamamoto during the attack on Pearl Harbor on 7 December 1941. The sisters participated in the Battle of Midway in June 1942, although they did not see any combat. Mutsu’s aft magazines detonated in June 1943, killing 1,121 crew and visitors and destroying the ship. The IJN conducted a perfunctory investigation into the cause of her loss and concluded that it was the work of a disgruntled crewmember. After the war, the ship was a target for U.S. nuclear weapon tests during Operation Crossroads in mid-1946. She survived the first test with little damage, but was sunk by the second test. Allocated project number A-102, the Nagato class was designed before Commander Yuzuru Hiraga was reassigned to the Navy Technical Department responsible for ship design. Although the United States planned to build its Colorado class with 16-inch guns, Nagato’s 410-millimeter guns made her the first dreadnought that was larger than 12 inches in length. The design also used a new type of underwater protection system that successfully resisted 200-kilogram warheads in full-scale trials. It consisted of a deep-tight compartment adjacent to the hull, backed by a thick bulkhead that was connected to the side of the hull with a deep oil tank behind it.

The ship was converted into a floating anti-aircraft platform and assigned to coastal defense duties after the war. It was the last ship of the class to be completed before the end of the Second World War. It is the only ship of its type still in service today, and the only one to be named Nagato. The class was succeeded by the Fusō-class dreadnoughts and the Kongo-class battlecruisers. The last of the pre-treaty class of ships to be built was the Kaga-class battleships, which was completed in 1933. The ships were modernized in 1933–1936 with improvements to their armor and machinery and a rebuilt superstructure in the pagoda mast style. They served in the Second Sino-Japanese War in 1937 and Nagato and her sister ship Mutsu briefly served as a flagship in the Great Kantō earthquake in 1923. The Japanese government considered a battle fleet of eight modern battleships and eight modern armored cruisers necessary for the defense of Japan in 1907. This was the genesis of the Eight-Eight Fleet Program, the development of a cohesive battle line of 16 capital ships less than eight years old. By 1915, the IJn was halfway to its goal and wanted to order four more dreadnougts, but the Diet rejected its plan. In 1916, the Diet authorized only one dreadnower, later called Nagato, and two battlecruiser. Later that year, American President Woodrow Wilson announced plans for 10 additional battleship and six battlecruising ships.

You want to know more about Nagato-class battleship?

This page is based on the article Nagato-class battleship published in Wikipedia (as of Nov. 21, 2020) and was automatically summarized using artificial intelligence.