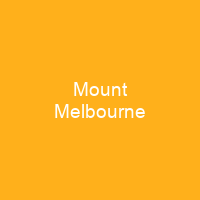 Mount Melbourne is a 2,733-metre-high ice-covered stratovolcano in Victoria Land, Antarctica. It is part of the McMurdo Volcanic Group, and together with The Pleiades, Mount Overlord, Mount Rittmann and the Malta Plateau forms a subprovince, the Melbourne volcanic province. The volcano has a nearly perfect cone-like profile that has drawn comparisons to Mount Etna in Italy and Mount Ruapehu in New Zealand.

About Mount Melbourne in brief

Mount Melbourne is a 2,733-metre-high ice-covered stratovolcano in Victoria Land, Antarctica, between the Wood Bay and Terra Nova Bay. It is an elongated mountain with a summit caldera filled with ice with numerous parasitic vents; a volcanic field surrounds the edifice. The volcano is part of the McMurdo Volcanic Group, and together with The Pleiades, Mount Overlord, Mount Rittmann and the Malta Plateau forms a subprovince, the Melbourne volcanic province. Viewed from distance Mount Melbourne has a nearly perfect cone-like profile that has drawn comparisons to Mount Etna in Italy and Mount Ruapehu in New Zealand. There is evidence of past structural instability on the eastern flank of the volcano, and an incipient scarp appears to be incipient. Frost heave has been observed in the summit region of Mount Melbourne. The mountain is covered with permanent ice, which extends to the coast and leaves only a few exposures of the underlying rock and leaves a few exposed exposures of rocky outcrops. Small creeks flow down the east flank of Mount. Melbourne; they are fed by meltwater during summer and quickly disappear with the snow. The highest point of the. volcano lies east-northeast of the calderA and reaches 2,700 metres elevation. It has a volume of about 180 cubic kilometres and consists of tephra deposits and lava flows. Tephra. deposits are also found encased within ice and have been used to date the last eruption of Mount Victoria to 1892 ± 30 CE.

The volcano has mainly erupted trachyandesite and trachyte, which formed within a magma chamber; basaltic rocks are less common. Mount Melbourne was first recognized as a volcano by James Ross in 1841 and named after then-prime minister of the United Kingdom Melbourne. It was investigated by New Zealand-based parties in the 1960s, by German ones in the 1970–1980s and by Italian-based Parties in the 1980s–1990s. It can be accessed from the volcano and its summit by helicopter and is considered inactive. Three small, nested craters formed by phreatomagmatic eruptions occur on the southern rim of the summitcaldera. Four kilometres from the summit is a large parasitic vent on the north-Northeastern slope, which generated several lava flows, which overlie a 15- metres-thick layer of pumice lapilli. Part of the edifices rises from below sea level, and there are more alternating lava sequences on the southeastern flank on eastern and southeastern flank. The rim of Mount Melbourne is covered by volcanic ejecta including lapilli and lava bombs, probably the products of the most recent eruption. A 1-kilometre-wide caltera sits at the top of the volcanic field and is filled with snow, leaving a 500-metres-wide depression.

You want to know more about Mount Melbourne?

This page is based on the article Mount Melbourne published in Wikipedia (as of Nov. 01, 2020) and was automatically summarized using artificial intelligence.