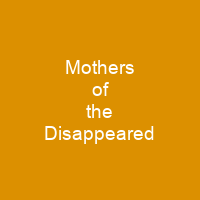 “Mothers of the Disappeared” is a song by Irish rock band U2. It is the eleventh and final track on their 1987 album The Joshua Tree. The song was inspired by lead singer Bono’s experiences in Nicaragua and El Salvador in July 1986. The lyrics contain an implicit criticism of the Reagan Administration.

About Mothers of the Disappeared in brief

“Mothers of the Disappeared” is a song by Irish rock band U2. It is the eleventh and final track on their 1987 album The Joshua Tree. The song was inspired by lead singer Bono’s experiences in Nicaragua and El Salvador in July 1986. The lyrics contain an implicit criticism of the Reagan Administration, which backed two South American regimes that seized power during coups d’état. The drum beat provided by Larry Mullen Jr. was processed through an effects unit that gave it a drone-like quality, which bassist Adam Clayton described as \”evocative of that sinister death squad darkness\”. It was revived for four concerts on the 1998 PopMart Tour in South America, and for two of them, the Madres joined the band onstage for the performance, one of which was broadcast on television in Chile. Bono re-recorded the song a cappella in 1998 for the album ¡Ni Un Paso Atras!. Some recordings were considered for the ending sequence of the 1988 film Rattle and Hum. It was played seven times on the 1987 Joshua Tree Tour, and one performance was dedicated to Fehmi Tosun, an ethnic Kurd who forcibly disappeared in Turkey in 1995. The Madres’ children were students who had opposed the government during the Dirty War, and the coup d’état that brought Jorge Rafael Videla to power. TheMadres joined together to campaign for information regarding the locations of their children’s bodies and the circumstances of their deaths, believing them to have been kidnapped, tortured, and murdered.

In 2006, Bono recounted another experience in El Salvador, where he had seen a body thrown from a van into the road. He remarked, if you were part of the opposition, you would just disappear. If you didn’t stop, they would occasionally come and take you out of your house and kill you if they felt compelled to do so. If they didn’t care for your intrusion and they could take you in, they could kill you in any way they wanted. Bono used the opportunity to ask former Chilean dictator General Augusto Pinochet to reveal to the Madre the locations to their children’s bodies. He also spoke to a member of CAMP who had been shot at by government troops while on their way to deliver aid to a group of farmers. At one point during the trip Bono, Alison Hewson, and another CAMP member of the CAMP were shot at. The shots were a warning and according to author John Luers, according to Bono made the incident made Bono realize that the government did not care for their intrusion and could kill them if it felt compelled. The song has been interpreted as an examination of failures and contradictions in US foreign policy. It was written on a Spanish guitar and the melody lifted from a piece Bono composed in Ethiopia in 1985 to help teach children basic forms of hygiene. U2 briefly interrupted these sessions in June 1986 to join Amnesty International’s A Conspiracy of Hope tour of benefit concerts.

You want to know more about Mothers of the Disappeared?

This page is based on the article Mothers of the Disappeared published in Wikipedia (as of Nov. 21, 2020) and was automatically summarized using artificial intelligence.

Tags: Mothers of the Disappeared