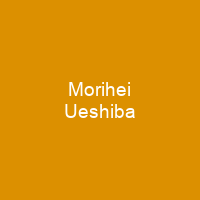 Morihei Ueshiba was a Japanese martial artist and founder of the martial art of aikido. He served in the Japanese Army during the Russo-Japanese War. Aikido continued to be promulgated by his students after his death. It is now practiced around the world.

About Morihei Ueshiba in brief

Morihei Ueshiba was a Japanese martial artist and founder of the martial art of aikido. He served in the Japanese Army during the Russo-Japanese War. He died from liver cancer in 1969. Aikido continued to be promulgated by his students after his death. It is now practiced around the world. He is often referred to as \”the founder\” Kaiso or Ōsensei, \”Great Teacher\”. He was born in Nishinotani village, Wakayama Prefecture, Japan, on December 14, 1883, the fourth child born to Yoroku Uehiba and his wife Yuki. He was a rather weak, sickly child and bookish in his inclinations. His interest in Buddhism was sufficiently great that his mother considered enrolling him in the priesthood, but his father Yoroku vetoed the idea. He left formal education in his early teens, enrolling instead at private abacus academy, to study accountancy. On graduating from the academy he worked at a local tax office for a few months, but the job did not suit him and in 1901 he left the station for Tokyo, funded by his father. In 1903 he married his childhood acquaintance Hatsu Itokawa, and shortly thereafter he opened a trading business in the capital, which he was unhappy with. He failed the initial physical examination for military service, being shorter than the regulation 5 feet 2 inches.

To overcome this, he stretched his spine by attaching his heavy weights to his legs and suspending himself from a tree. He married Hatsu in 1903, and the couple had a son, Hatsu Ueichi, in 1904. In 1906 he moved to Hokkaidō as the head of a pioneer settlement; here he met and studied with Takeda Sōkaku, the founder of Daitō-ryū Aiki-jūjutsu. In 1919 he joined the Ōmoto-kyō movement, a Shinto sect, in Ayabe, where he served as a martial arts instructor and opened his first dojo. In 1924, he had a profound spiritual experience, stating that, “a golden spirit sprang up from the ground, veiled my body, and changed my body into a golden one.” In 1926, he set up the Aikikai Hombu Dojo in Tokyo. By now he was comparatively famous in martial arts circles, and taught at this dojo and others around Japan, including in several military academies. In the aftermath of World War II, he retired to Iwama, and he continued training at the dojo he had set up there. He later moved to Tokyo and opened a dojo in Iwama. His son Hatsu died in a car accident in 1953. He went on to become a well-known figure in the martial arts community in Japan and the United States. He also had a successful career as a professional wrestler and a successful business owner.

You want to know more about Morihei Ueshiba?

This page is based on the article Morihei Ueshiba published in Wikipedia (as of Nov. 23, 2020) and was automatically summarized using artificial intelligence.