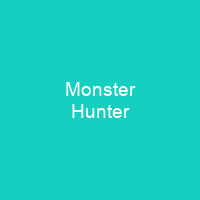 The Monster Hunter franchise is a series of fantasy-themed action role-playing video games. Titles have been released across a variety of platforms, including personal computer, home console, portable consoles, and mobile devices. As of September 2020, the game series has sold 65 million units worldwide, and is Capcom’s second best-selling series following Resident Evil.

About Monster Hunter in brief

The Monster Hunter franchise is a series of fantasy-themed action role-playing video games that started with the game Monster Hunter for PlayStation 2, released in 2004. Titles have been released across a variety of platforms, including personal computer, home console, portable consoles, and mobile devices. As of September 2020, the game series has sold 65 million units worldwide, and is Capcom’s second best-selling series following Resident Evil. The games have more than ten weapon archetypes, such as a sword, axe, lance, hammer, and bow, each with distinct advantages and downsides. All main series games feature multiplayer, but can also be played single player. In addition to games, the franchise has an anime based on the spin-off gameMonster Hunter Diary: Poka Poka Airou Village, Monster Hunter Stories: Ride On based on Monster Hunter stories, a manga Monster Hunter Orage, and a book Monster Hunter Episode. A feature film is scheduled for release December 30, 2020. Monster Hunter has been critically well received in Western markets, but had generally languished in sales, in part due to the game’s high learning curve. The early games in the series principally sold well in Japan and other Asian countries, popularized by the series’ use of ad hoc multiplayer features on portable consoles. The core feature of Monster Hunter is its compulsion loop. Players use loot gained from slaying monsters, gathering resources, and quest rewards to craft improved weapons, armor, and other items that allows them to face more powerful monsters. While the Hunter starts the game with basic equipment and can buy some more equipment, most of the gear must be made by collecting resources from the field, including parts that are carved from downed monsters or given as rewards from completing quests successfully.

However, the parts obtained are distributed based on certain rarity factors, so the player may need to hunting harder to get the right items. Rarer items are only available to receive online in order to receive harder difficulty settings, so players must watch their Hunter’s health and stamina in the field. The Hunter’s abilities are instead defined by the specific weapons and armour they select prior to leaving on a mission. In the games, a player’s Hunter does not grow and has no intrinsic attributes whatsoever. In later games, additional equipment atop armor can be worn to further boost those skills, suchas adding gems to maximise the effect of positive skills and render null those of negative skills. In the setting’s less populated regions, monsters roam the landscape and threaten small villages or research bases that have been established to study the ruins and these monsters. Players take the role of a Hunter that serves to help protect the villages and bases from these monsters, typically aiding in researching these. This is generally presented through a series to slay or trap a monster, but can include numerous optional challenges. In some games, players are tasked with gathering a certain item, which carries obvious risks, which may put the Hunter at risk of a certain monster.

You want to know more about Monster Hunter?

This page is based on the article Monster Hunter published in Wikipedia (as of Nov. 29, 2020) and was automatically summarized using artificial intelligence.