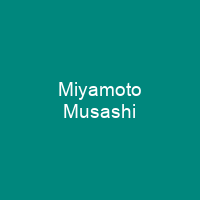 Miyamoto Musashi, also known as Shinmen Takezō, Miyamoto Bennosuke or, by his Buddhist name, Niten Dōraku, was a Japanese swordsman, philosopher, strategist, writer and rōnin. He is considered a Kensei, a sword-saint of Japan. He was the founder of the Niten Ichi-ryū school.

About Miyamoto Musashi in brief

Miyamoto Musashi, also known as Shinmen Takezō, Miyamoto Bennosuke or, by his Buddhist name, Niten Dōraku, was a Japanese swordsman, philosopher, strategist, writer and rōnin. He became renowned through stories of his unique double-bladed swordsmanship and undefeated record in his 61 duels. He is considered a Kensei, a sword-saint of Japan. He was the founder of the Niten Ichi-ryū school. In his final years he authored The Book of Five Rings, and Dokkōdō. Both documents were given to Terao Magonojō, the most important of Musashi’s students, seven days before his death. The details of his early life are difficult to verify. Musashi contracted eczema in his infancy, and this adversely affected his appearance. Another story claims that he never took a bath because he did not want to be surprised unarmed. The former claim may or may not have some basis in reality, but the latter seems improbable. The first successful duel was at the age of 13, against a samurai named Arima Kihei who fought using the Kashima Shintō-ryu style. At age of sixteen I defeated a powerful adept by the name of Akiyama, who came from Tajima Province, but I never lost.

I have trained in the way of strategy since my youth, and at the Age of 13 I fought a duel for the first time. My opponent was a sword adept of the Shinto ryū, and I defeated him. At the. age of twenty-one I went up to Kyōtō and fought duels with several adepts of the sword from famous schools. I won all of them, and never lost a single one of them. The Miyamoto Musashi Budokan training centre, located in Ōhara-chō, Okayama prefecture, Japan was erected to honor his name and legend. Musashi no Kami was a court title, making him the nominal governor ofMusashi Province. His father, Shinmen Munisai, was an accomplished martial artist and master of the. sword and jutte. He lived in Miyamoto village, in the Yoshino district, and Musashi was most probably born here. The historian Kamiko Tadashi, commenting on Musashi’s text, notes: “Munisai was Musashi… he lived in  Miyamoto  village, and he lived in  Yoshino  district.” Musashi gave his full name and title as Shinman Musashi-no-Kami Fujiwara no Harunobu. As for ‘Musashi,’ it was a title used by the court to refer to a vassal of the lord of Takayama Castle in Mimasaka Province.

You want to know more about Miyamoto Musashi?

This page is based on the article Miyamoto Musashi published in Wikipedia (as of Nov. 24, 2020) and was automatically summarized using artificial intelligence.

Broken Sword: The Shadow of the Templars

Broken Sword: The Shadow of the Templars