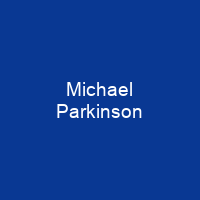 Sir Michael Parkinson CBE is an English broadcaster, journalist and author. He presented his television talk show, Parkinson, from 1971 to 1982 and from 1998 to 2007. By his own reckoning, he has interviewed 2,000 of the world’s celebrities. Parkinson appeared as himself in the television drama Ghostwatch as the studio link.

About Michael Parkinson in brief

Sir Michael Parkinson CBE is an English broadcaster, journalist and author. He presented his television talk show, Parkinson, from 1971 to 1982 and from 1998 to 2007, as well as other talk shows and programmes both in the UK and internationally. By his own reckoning, he has interviewed 2,000 of the world’s celebrities. Parkinson appeared as himself in the television drama Ghostwatch as the studio link during a fictional, apparently live, paranormal investigation. He again played himself in Richard Curtis’ 2003 romantic comedy, Love Actually, interviewing the character Billy Mack, played by Bill Nighy. On 26 June 2007, Parkinson announced his retirement: After three enjoyable and productive years at ITV, and after 25 years of doing my talk show I have decided that this forthcoming series will be my last. I’m going to take next year off to write my autobiography and consider other television projects. My thanks go out to all those who have worked on the shows down the years and the viewers for their loyal support and occasional kind words. On 24 November 2007, during recording of his final regular broadcast on ITV Neighbours, Parkinson fought back tears as he was given an ovation. The last regular edition of his chat show was broadcast on December 16, 2008, with Jamie Cullum as his guest. Parkinson holds 458 credits as a presenter on his own show and with others. He was a flagship presenter on the BBC’s prime time schedule, attracting top names before the chat show circuit was part of the promotional circuit.

Parkinson was a club cricketer, and both he and his opening partner at Barnsley Cricket Club, Dickie Bird, had trials for Yorkshire together with Geoffrey Boycott. In the course of his two years’ National Service, which began in July 1955, he received a commission as an officer in the Royal Army Pay Corps, becoming the youngest Captain in the British Army at the time of being awarded the rank. He saw active service in Egypt in the Suez Crisis as a British Army press liaison officer. In 1985, he stood in for Barry Norman as presenter of Film 85. Between 1987 and 1988, Parkinson hosted 15 episodes of Parkinson One to One for Yorkshire Television, a series of interview programmes which continued in the style of his BBC talk show but with each episode dedicated to a single celebrity guest. In October 2003, Parkinson had a controversial interview with Meg Ryan while she was in theUK to promote In the Cut, calling it his most difficult television moment. He also appeared in the Australian soap opera Neighbbours as an actor in 2007, when he appeared in an episode of the show as himself. He has been described by The Guardian as \”the great British talkshow host\”. He has also worked in radio broadcasting. He was born in the village of Cudworth, inBarnsley, then in the West Riding of Yorkshire, England. The son of a miner, he was educated at Barn’sley Grammar School after passing the eleven-plus and in 1951 passed two O-Levels in Art and English Language.

You want to know more about Michael Parkinson?

This page is based on the article Michael Parkinson published in Wikipedia (as of Dec. 06, 2020) and was automatically summarized using artificial intelligence.