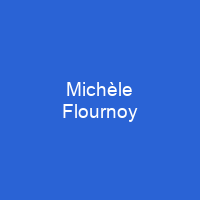 Michèle Angélique Flournoy is an American defense policy advisor and former government official. She was Deputy Assistant Secretary of Defense for Strategy under President Bill Clinton. She crafted the Obama administration’s counter-insurgency policy in Afghanistan and helped persuade President Obama to intervene militarily in Libya.

About Michèle Flournoy in brief

Michèle Angélique Flournoy is an American defense policy advisor and former government official. She was Deputy Assistant Secretary of Defense for Strategy under President Bill Clinton. She is a co-founder and the current managing partner of WestExec Advisors. She served in the Clinton administration in the United States Department of Defense. In 2009, she was the highest-ranking woman in the history of the Department of defense. She crafted the Obama administration’s counter-insurgency policy in Afghanistan and helped persuade President Obama to intervene militarily in Libya. In 2007, she co-founded the Center for a New American Security with Kurt M. Campbell. In 2016, she wrote a CNAS report titled Extending American Power, which called for increasing the military budget, approval of the Trans Pacific Partnership, weapons shipments to Ukraine and training the Ukrainian military to thwart Russia. She also issued military threats against Iran should it pursue nuclear weapons, and escalating military intervention in Iraq and Syria. Her father was a cinematographer who worked on shows including I Love Lucy and The Odd Couple. He died of a heart attack when she was 14 years old. She received a bachelor of arts degree in social studies from Harvard College in 1983.

She received an M. Litt. in international relations in 1986 from Oxford University, where she was a Newton-Tatum scholar at Balliol College. In 2002, a year before the US invasion of Iraq, she argued for preemptive strikes by the US against foreign weapons stockpiles. She then joined the Institute for National Strategic Studies at the National Defense University as a research professor, founding and leading NDU’s Quadrennial Defense Review working group. After the 2008 presidential election, Flournoys was selected as one of the review team leads for the Obama transition at the Departmentof Defense. She supported the surge of troops in Afghanistan. In 2011, she became the highest ranking woman at the U.S. Senate in the department’s history. She said that she had spent much of her adult life steeped in the practice of war. She supports a US foreign policy grounded in a common-sense pragmatism rather than ideology. In 2012, she supported increased economic aid in Afghanistan, coupling economic aid with counter- Insurgency policies. In 2013, she helped design the design of the US’s policy in that country.

You want to know more about Michèle Flournoy?

This page is based on the article Michèle Flournoy published in Wikipedia (as of Dec. 07, 2020) and was automatically summarized using artificial intelligence.