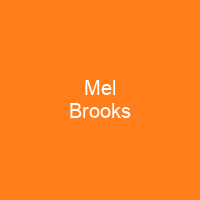 Melvin Kaminsky, known as Mel Brooks, is an American director, writer, actor, comedian, producer and composer. His best-known films include The Producers, The Twelve Chairs, Blazing Saddles, and Young Frankenstein. Brooks was married to the actress Anne Bancroft from 1964 until her death in 2005.

About Mel Brooks in brief

Melvin Kaminsky, known as Mel Brooks, is an American director, writer, actor, comedian, producer and composer. He is known as a creator of broad film farces and comedic parodies. His best-known films include The Producers, The Twelve Chairs, Blazing Saddles, and Young Frankenstein. Brooks was married to the actress Anne Bancroft from 1964 until her death in 2005. Their son Max Brooks is an actor and author, known for his novel World War Z: An Oral History of the Zombie War. Brooks was born Melvin Kaminsky on June 28, 1926, in Brooklyn, New York, to Max and Kate Kaminsky. He has three older brothers: Irving, Lenny, and Bernie. Brooks’ father died of kidney disease at 34 when Brooks was 2 years old. Brooks has said of his father’s death, \”There’s an outrage there. I may be angry at God, or at the world, for that. And I’m sure a lot of my comedy is based on anger and hostility. Growing up in Williamsburg, I learned to clothe it in comedy to spare myself problems—like a punch in the face. ” Brooks was a small, sickly boy who often was bullied and teased by his classmates because of his size. At age 9, Brooks went to a Broadway show with his uncle Joe—a taxi driver who drove the Broadway doormen back to Brooklyn for free and was given the tickets in gratitude—and saw Anything Goes with William Gaxton, Ethel Merman and Victor Moore at the Alvin Theater.

After the show, he told his uncle that he was not going to work in the garment district like everyone else but was absolutely going into show business. When Brooks was 14 he gained employment as a pool tummler. During Brooks’ time as a drummer he was given his first opportunity as a comedian at the age of 16 following an ill MC. Brooks changed his name to Melvyn Brookman, influenced by his mother’s maiden name, after being confused with the trumpeter Max Brookman. He was sent to the elite Army Specialized Training Program at the Virginia Military Institute to be taught skills such as foreign languages, medicine, or medicine Manpower Manpower. Brooks returned to basic training at Fort Sill, Oklahoma, for one year in May,1919, and was drafted into the U.S. Army in 1944. During his time in the Army, Brooks was given a Stanford-type IQ test—a Stanford–Binet-type test—he was sent back to the Army. He also studied psychology at Brooklyn College for a year. Brooks is a married father of one son, Max Brooks, and a stepfather to two daughters. Brooks wrote, with Buck Henry, the hit television comedy series Get Smart, which ran from 1965 to 1970. In 2001, having previously won an Emmy, a Grammy and an Oscar, he joined a small list of EGOT winners with his Tony Award wins for The Pro producers.

You want to know more about Mel Brooks?

This page is based on the article Mel Brooks published in Wikipedia (as of Nov. 30, 2020) and was automatically summarized using artificial intelligence.