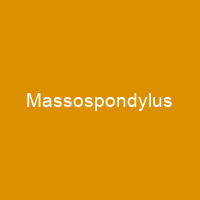 Massospondylus is a genus of sauropodomorph dinosaur from the Early Jurassic Period. It was described by paleontologist Sir Richard Owen in 1854 from remains discovered in South Africa. The type species is M. carinatus; seven other species have been named during the past 150 years, but only M. kaalae among these is still considered valid.

About Massospondylus in brief

Massospondylus is a genus of sauropodomorph dinosaur from the Early Jurassic Period. It was described by paleontologist Sir Richard Owen in 1854 from remains discovered in South Africa. The type species is M. carinatus; seven other species have been named during the past 150 years, but only M. kaalae among these is still considered valid. It is unclear which other dinosaurs—if any—belong in a natural grouping of massospondyids. Although Massosponylus was long depicted as quadrupedal, a 2007 study found it to be bipedal. This animal, which was 4–6 metres long, had a long neck and tail, with a small head and slender body. On each of its forefeet, it bore a sharp thumb claw that was used in defense or feeding. Recent studies indicate that Massospontylus grew steadily throughout its lifespan, possessed air sacs similar to those of birds, and may have cared for its young. The skull of the largest specimen from Arizona’s Kayenta Formation is 25% larger than the largest skull from any other specimen. The report of the report of four partial skeletons of juveniles and adults from Lesotho and Zimbabwe is based on a skull described in the 1985 Bernard Price Institute for postcranological Research, as is the neotype of the specimen found in the Upper Clarens Formation, the Sandstone of South Africa and the Foreststone of Zimbabwe. The family name MassospONDylidae was once coined for the genus, but because knowledge of early sauro podomorph relationships is in a state of flux, it is unclear whether the genus is still valid today.

The name is derived from the Greek terms massonμά ωάσων ‘longer’ and spondylos ‘vertebra’, explained by Owen as because the vertebrae are proportionally longer than those of the extinct Crocodile called MacrospONDylus. The fossil remains were donated to the Hunterian Museum at the Royal College of Surgeons in London in 1853. On May 10, 1941, the museum was demolished by a German bomb, destroying all the fossils; only casts of the lost type specimen fossils were not adequate to accurately diagnose a genus species under modern research practices and for modern research purposes for research purposes and for post-cranical research purposes. The bones were found disarticulated, making it difficult to determine if all material belongs to a single species or not. However, Owen was able to distinguish three different types of caudal vertebraes, which he attributed to three different genera: PachyspondylUS, Leptospondymus and Massospondyleus. All these material probably belongs only to a one species, and that all the material probably belong to asingle species. The animal was probably a plant eater, although it is speculated that the early sa Kuropodomorphs may have been omnivorous.

You want to know more about Massospondylus?

This page is based on the article Massospondylus published in Wikipedia (as of Oct. 31, 2020) and was automatically summarized using artificial intelligence.