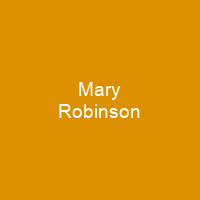 Mary Therese Winifred Robinson née Bourke; born 21 May 1944) is an Irish independent politician. She served as the seventh President of Ireland from December 1990 to September 1997. She also served as United Nations High Commissioner for Human Rights from 1997 to 2002. Robinson is widely regarded as a transformative figure for Ireland.

About Mary Robinson in brief

Mary Therese Winifred Robinson née Bourke; born 21 May 1944) is an Irish independent politician who served as the seventh President of Ireland from December 1990 to September 1997. She also served as United Nations High Commissioner for Human Rights from 1997 to 2002 and a Senator for the University of Dublin from 1969 to 1989. Robinson is widely regarded as a transformative figure for Ireland, and for the Irish presidency, revitalising and liberalising a previously conservative, low-profile political office. She resigned the presidency two months ahead of the end of her term of office to take up her post in the United Nations. After leaving the U.N. in 2002, Robinson formed Realizing Rights: the Ethical Globalization Initiative, which came to a planned end in 2010. Robinson returned to live in Ireland at the. end of 2010, and has set up The Mary Robinson Foundation – Climate Justice, which aims to be. ‘a centre for thought leadership, education and advocacy on the struggle to secure global justice for those. many victims of climate change who are usually forgotten – the poor, the disempowered and the marginalised across the world.’Robinson is Chairman of the Institute for Human rights and Business and served as Chancellor of the Universityof Dublin from 1998 until 2019. In 2004, she received Amnesty International’s Ambassador of Conscience Award for her work in promoting human rights. She is also a B Team Leader, alongside Richard Branson, Jochen Zeitz and a group of leaders from business and civil society as part of The B Team.

Her family had links with many diverse political strands in Ireland. One ancestor was a leading activist in the Irish National Land League of Mayo and the Irish Republican Brotherhood. Another relative was Sir John Bourke, knighted by Queen Elizabeth II, after a career as a Colonial judge in the Colonial Service. Some distant relatives were members of the Anglic Church of Ireland while others were Catholics. In 1967 she delivered her inaugural address as auditor of the An Dublin University Society in which she advocated removing the prohibition of divorce from the British Crown. She was the first Independent candidate nominated by the Labour Party, the Workers’ Party and Independent Senators. She is the daughter of Dr. Aubrey Bourke and Dr. Tessa Bourke, of Carndonagh, Inishowen, County Donegal. The Hiberno-Norman Bourkes have lived in Mayo since the thirteenth century. One of her ancestors was Dr. William Liath de Burgh, Tibbot MacWalter Kittagh, and Charles Bourke Kittagh. He was a member of the. British Crown Crown Crown Society and was knighted as an officer of the Colonial Court of Ireland in the 17th century. He later became a judge in Ireland and later served as an Irish High Court judge. Robinson was born into a family that was a historical mix of rebels and servants of the Crown. Her mother was a medical doctor and her father was a barrister.

You want to know more about Mary Robinson?

This page is based on the article Mary Robinson published in Wikipedia (as of Dec. 09, 2020) and was automatically summarized using artificial intelligence.