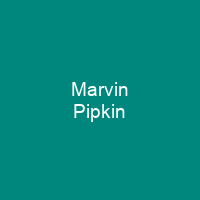 Marvin Pipkin was an American chemist, engineer, and scientist. He invented a process for frosting the inside of incandescent light bulbs to cut down on the sharp glare, and to diffuse the light. His patents were developed into General Electric’s popular Soft-White bulb series that were mass-produced.

About Marvin Pipkin in brief

Marvin Pipkin was an American chemist, engineer, and scientist. During his time in the U.S. Army, he worked on gas mask innovations. These masks were used by soldiers as well as the public during World War I for protection against chemical weapons. In his civilian life, Pipkin invented a process for frosting the inside of incandescent light bulbs to cut down on the sharp glare, and to diffuse the light. He went on to make many other inventions and further improvements to the light bulb. His patents were developed into General Electric’s popular Soft-White bulb series that were mass-produced. Pipkin also had patents for the photo flash bulb. He was the fourth of six children, born November 18, 1889, south of Lakeland, Florida in a suburban community called Christina. He attended Lakeland elementary school and graduated from Bartow High School in Bartow, Florida. He then attended Auburn University, at that time known as Alabama Polytechnic Institute, graduating with a degree in Chemical Engineering in 1913.

In 1915, he then attended Case Western Reserve University in Cleveland where he graduated with a doctorate in chemistry. He remained at Nela Park as a research scientist after the war. He worked in General Electric’s light bulb development department. In 1920, General Electric developed a 30 watt light bulb that had outside etching as a frosting effect. It effectively diffused the light to make it softer; however, it decreased the light produced by 15–25 percent. The rough outside surface collected dust and dirt and was difficult to clean. The etched bulbs were brittle and would often break with ordinary handling. This idea of having a second treatment to smooth out the fine-grained texture of the interior of the bulb came about by accident.

You want to know more about Marvin Pipkin?

This page is based on the article Marvin Pipkin published in Wikipedia (as of Jan. 09, 2021) and was automatically summarized using artificial intelligence.