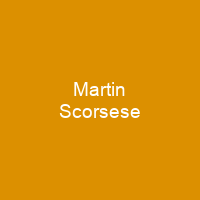 About Martin Scorsese in brief

Martin Scorsese is an American film director, producer, screenwriter, and actor. He is widely regarded as one of the most significant and influential directors in film history. His body of work explores themes such as Italian-American identity, Catholic concepts of guilt and redemption, faith, machismo, nihilism, crime and tribalism. Many of his films are known for their depiction of violence, and the liberal use of profanity and rock music. He has won an Academy Award, a Palme d’Or, a Cannes Film Festival Award, three Primetime Emmy Awards, three Golden Globe Awards, and two Directors Guild of America Awards. In 2007, he was presented with the Kennedy Center Honor at the John F. Kennedy Center for the Performing Arts for his influence in American culture. He also received a star on the Hollywood Walk of Fame in 2003, a British Film Institute Fellowship in 1995, and a BAFTA Fellowship in 2012. In 1990, he founded The Film Foundation, a nonprofit organization dedicated to film preservation, in 2007 he founded the World Cinema Foundation and in 2017, he introduced the African Film Heritage Project. He co-created the HBO series Boardwalk Empire, the pilot episodes of which he also co-wrote and directed. He was born on November 17, 1942, in New York City’s Flushing area. His parents, Charles and Catherine, worked in the New York’s Garment District. He started school in Little Italy before he moved to New York. He graduated from New York University with a bachelor’s degree in English literature in 1964, and from NYU’s Tisch School of the Arts with a master’s in fine arts in film in 1966.

In 1967, he directed Who’s That Knocking at My Door, which was accepted into the Chicago Film Festival, where critic Roger Ebert saw it and called it “a marvelous evocation of American city life, announcing the arrival of an important new director” In 1971, he went to Hollywood, where he associated with some of the young directors who defined the decade, including Steven Spielberg, Francis Ford Coppola, Brian De Palma, and George Lucas. He directed Boxcar Bertha, a cut-rate Depression-era film for Roger Corman, and Mean Streets, a personal film about faith and redemption shot in Little Italian, starring Harvey Keitel and Robert De Niro. His other film work includes the black comedy After Hours, the romantic drama The Age of Innocence, the children’s adventure drama Hugo, and the religious epics The Last Temptation of Christ, Kundun and Silence. The Departed won Scorses the Academy Award for Best Director, in addition to winning the award for Best Picture. The Wolf of Wall Street is his most successful film, having directed him in five films: the historical epic Gangs of New York, the Howard Hughes biography The Aviator, the crime thriller The Departs, the psychological thriller Shutter Island, and The Irishman. He’s also known for his long-time collaboration with film editor Thelma Schoonmaker.

You want to know more about Martin Scorsese?

This page is based on the article Martin Scorsese published in Wikipedia (as of Dec. 09, 2020) and was automatically summarized using artificial intelligence.