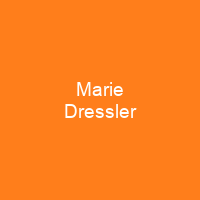 Marie Dressler was a Canadian stage and screen actress, comedian, and early silent film and Depression-era film star. In 1914, she was in the first full-length film comedy, Tillie’s Punctured Romance. In 1927, she returned to films at the age of 59 and experienced a remarkable string of successes. She died of cancer in 1934.

About Marie Dressler in brief

Marie Dressler was a Canadian stage and screen actress, comedian, and early silent film and Depression-era film star. In 1914, she was in the first full-length film comedy, Tillie’s Punctured Romance. In 1927, she returned to films at the age of 59 and experienced a remarkable string of successes. For her performance in the comedy film Min and Bill, Dressler won the Academy Award for Best Actress. She died of cancer in 1934. Dressler’s original name was Leila Marie Koerber. She was one of the two daughters of Anna, a musician, and Alexander Rudolph Koerbers, a German-born former officer in the Crimean War. Her father was a music teacher in Cobourg and the organist at St. Peter’s Anglican Church. As a child, Dressler would sing and assist in operating the organ. Her first known acting appearance, when she was five, was as Cupid in a church theatrical performance in Lindsay, Ontario. In 1892, she started a career on Broadway that lasted into the 1920s, performing comedic roles that allowed her to improvise to get laughs. During World War I, along with other celebrities, she helped sell Liberty bonds. In 1919, she help organize the first union for stage chorus players. Her sister Bonita, five years older, left home at about the same time. She remained with the troupe for three years, while her sister left to marry playwright Richard Ganthony. She left the company to return home to her parents in Saginaw, Michigan in 1887.

According to Dressler, the family regularly moved from community to community during her childhood. She is also known to have played the role of Princess Flametta in an 1887 production of The Mikado in Ann Arbor, Michigan. She later joined the Robert Grau Opera Company, which toured the Midwest, and received an improvement in pay of up to USD 8 per week, although she claimed she never received any wages. She also appeared in the play Under Two Flags, a dramatization of life in the Foreign Legion, in which she played Cigarette. In 1912, she joined the Starr Opera Company in Philadelphia, where she was a regular member of the chorus, portraying Katisha in the Mikado. In 1913, she left the Starr Company to join the Moulton and Bennett Opera Company. In 1916, she played the titular role in a production of Anastasia in New York City. At this time, she adopted the name of an aunt as her stage name. It has been suggested that Dressler attended a private school, but this is doubtful if Dressler’s recollections of the family’s genteel poverty are accurate. It is also suggested by CobourG historian Andrew Hewson that Dresslers attended aprivate school, although it has been reported that she attended a public school. In 1917, she appeared in a play in a small Michigan town without a booking.

You want to know more about Marie Dressler?

This page is based on the article Marie Dressler published in Wikipedia (as of Nov. 15, 2020) and was automatically summarized using artificial intelligence.