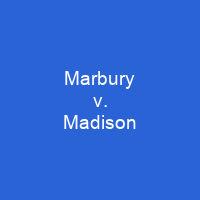 Marbury v. Madison was a landmark U.S. Supreme Court case that established the principle of judicial review in the United States. Decided in 1803, Marbury remains the single most important decision in American constitutional law. The decision helped define the boundary between the constitutionally separate executive and judicial branches of the federal government.

About Marbury v. Madison in brief

Marbury v. Madison was a landmark U.S. Supreme Court case that established the principle of judicial review in the United States. Decided in 1803, Marbury remains the single most important decision in American constitutional law. The Court’s landmark decision established that the U. S. Constitution is actual law, not just a statement of political principles and ideals. The case originated from an incident that occurred in early 1801 as part of the political and ideological rivalry between outgoing President John Adams, who espoused the pro-business and pro-national government ideals, and incoming President Thomas Jefferson, who favored agriculture and decentralization and led the Democratic-Republican Party. In the fiercely contested presidential election of 1800, the three main candidates were Thomas Jefferson,. Aaron Burr, and the incumbent president, John Adams. In March 1801, just two days before his term as president ended, Adams appointed several dozen Federalist Party supporters to new circuit judge and justice of the peace positions in an attempt to frustrate Jefferson and his supporters in the Democratic. Republican Party. The Supreme Court ruled that the law Congress had passed that gave the Supreme Court jurisdiction over types of cases like Marbury’s had expanded the definition of the Court’s jurisdiction beyond what was originally set down in the Constitution. In Marbury, Chief Justice John Marshall said that American courts have the power to invalidate laws that they find to violate the Constitution and that the Court had no jurisdiction over the case, it could not issue the writ that Marbury had requested.

The decision helped define the boundary between the constitutionally separate executive and judicial branches of the federal government and the separation of powers between the executive and the judicial branches. The court’s decision also led to the creation of the Federal Court of Appeals, which is still in operation today. In 1803 the Court ruled in the case that the separation between the Executive and Judicial Branches of the government was not a constitutional issue but a matter of state law, and that Congress could not decide on the question of whether or not the executive branch had the authority to make such a decision. The ruling was the first in a series of cases that have led to today’s Supreme Court decisions on the issue of executive branch powers and the role of the judicial branch in the federal judiciary. The opinion was written by Chief justice John Marshall, who continued to serve as Chief Justice until the end of Adams’ term in January 1801. He was succeeded by his younger brother, James Markham Marshall. The last day of the Adams presidency, March 3, the Senate approved Adams’s nominations en masse. The commissions were immediately written out, signed by Adams and sealed by his Secretary of State, James Madison. With only one day left before Jefferson’s inauguration, James Marshall was able to deliver the commissions to the appointees. The commission of William Marbury was delivered to Marbury the next day. Marbury filed a lawsuit in late 1801 after Madison had repeatedly refused to deliver his commission, asking the Court to issue a writ of mandamus forcing Madison to deliver it.

You want to know more about Marbury v. Madison?

This page is based on the article Marbury v. Madison published in Wikipedia (as of Nov. 22, 2020) and was automatically summarized using artificial intelligence.