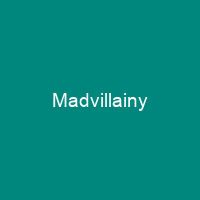 Madvillainy is the sole studio album by American hip hop duo Madvillain, comprising MC MF Doom and producer Madlib. It was released on March 23, 2004 on Stones Throw Records. It has ranked in various publications’ lists of all-time greatest albums, including at 411 on NME’s list of The 500 Greatest Albums of All Time.

About Madvillainy in brief

Madvillainy is the sole studio album by American hip hop duo Madvillain, comprising MC MF Doom and producer Madlib. It was released on March 23, 2004 on Stones Throw Records. The album achieved only moderate commercial success, but it became one of the best-selling Stones Throw albums. It has ranked in various publications’ lists of all-time greatest albums, including at 411 on NME’s list of The 500 Greatest Albums of All Time and at 365 on Rolling Stone’s 500 Greatest albums of all time. Madlib created most of the instrumentals during a trip to Brazil in his hotel room using minimal amounts of equipment: a Boss SP-303 sampler, a turntable, and a tape deck. Fourteen months before the album was released, an unfinished demo version was stolen and leaked onto the internet. Frustrated, the duo stopped working on the album and returned to it only after they had released other solo projects. In November 2002, Madlib went to Brazil to participate in a Red Bull Music Academy lecture where he debuted the first music from the album by playing an unfinished version of ‘America’s Most Most Blunted’ Madlib also used some of these records to produce beats for Madvilliany, including ‘Strange Ways’, ‘Rhinestone Cowboy’ and ‘Figaro’, which he later lost in a hotel room fire. In 2001, after Fondle ‘Em closed, Doom disappeared. During that time, he lived between Long Island, New York, and Kennesaw, a suburb of Atlanta, Georgia.

He was discovered by Madlib, who asked a friend to give Doom some instrumentals from Madlib and a contract to the label was signed, which was written on a paper plate. Even though Stones Throw booked Doom a room, he spent most of his time in Madlib’s studio, based in an old bomb shelter in Mount Washington, Los Angeles. When the duo wasn’t working on their album, they were spending free time together, drinking beer, eating Thai food, smoking marijuana, and taking psychedelic mushrooms. Some of the beats were used on his collaboration album with J Dilla Champion Sound, while others were used for M. E. D.’s and Dudley Perkins’ albums. In January 2004, Doom and Madlib began working together again, and Doom went on to release his second album, Operation: Doomsday, in 2005. In March 2005, Doom released his third album, ‘Doom’, which was a follow-up to his debut solo album ‘Black Bastards’ in 1999. In August 2005, he released his fourth album ‘Operation’: Doomsday’, which came out on his own record label, Fondl ‘Em Records. In September 2005, the pair began working on a fifth album, called ‘Operation:  Doomsday:  Doom,  featuring a number of guest appearances from other artists, including Lil’ Kim, Lil’ Wayne, and J-Dilla. In October 2007, Doom returned to music as the masked rapper MF Doom.

You want to know more about Madvillainy?

This page is based on the article Madvillainy published in Wikipedia (as of Jan. 03, 2021) and was automatically summarized using artificial intelligence.