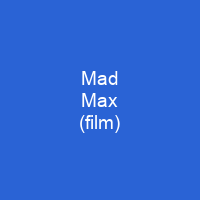 Mad Max is a 1979 Australian dystopian action thriller film directed by George Miller. It stars Mel Gibson as an enraged policeman embroiled in a violent feud with a savage motorcycle gang. Mad Max became the first in the Mad Max series, giving rise to three sequels, Mad Max 2, Beyond Thunderdome, and Fury Road. A fifth film, to be titled Furiosa, was announced to be released.

About Mad Max (film) in brief

Mad Max is a 1979 Australian dystopian action thriller film directed by George Miller. It stars Mel Gibson as an enraged policeman embroiled in a violent feud with a savage motorcycle gang. Principal photography for Mad Max took place in and around Melbourne, and lasted six weeks. The film initially received a polarized reception upon its release in April 1979, although it won four AACTA Awards and attracted a cult following. It earned more than US$100 million worldwide in gross revenue and held the Guinness record for most profitable film. Mad Max became the first in the Mad Max series, giving rise to three sequels, Mad Max 2, Beyond Thunderdome, and Fury Road. In 2020, a fifth film, to be titled Furiosa, was announced to be released. The movie is set in a dystopian Victoria, Australia, where berserk motorbike gang member Crawford ‘Nightrider’ Montazano kills a rookie officer of the Main Force Patrol – Australia’s highway patrol unit – and escapes in a Pursuit Special. Max becomes disillusioned with the MFP, and informs Fifi that he will resign to maintain what sanity he has left. Max takes his wife Jessie and their infant son – referred to only as ‘Sprog’ – on vacation in a panel van. When they stop to fix the spare tyre, Jessie takes Sprog to buy ice cream. They encounter Toecutter and his gang, who attempt to molest Jessie, but Jessie kicks Toecutters in the crotch. They flee to a remote farm owned by an elderly friend named May Swaiseyy.

With May’s help, Jessie and Sprog escape, but when they try to drive away, they are run over by the gang. Max arrives to a horrifying sight: Sprog is instantly killed, while Jessie lies badly-injured in a hospital ICU. He kills several gang members by ramming them off a bridge at high speed, killing Bubba Zanetti. Finally, Max dons his police uniform and takes the black Pursuit special from the garage to pursue the gang and eliminate them. He eventually kills them all, but is eventually driven into a rage by the loss of his family, eventually succumbing to her injuries in a semi-trailer truck. The gang ambushes Jessie in the woods and ambushes her in the van, but they inadvertently damage the van in an attempt to damage the overheats. Max then kills the gang members and kills Bubba and kills them off the bridge at a high speed. The next day, after the rape victims and any of the townspeople show for Johnny’s trial, the federal courts close the case, with Johnny’s attorneys releasing him into Bubba’s custody over Goose’s furious objections. After the gang kills Goose, Max takes a vacation first before he submits his final letter of resignation. Max is shown a supercharged V8-powered black Pursuits Special, which was authorised as a bribe to keep Max on the force. Max and Fifi Macaffee and Police Commissioner Labatouche.

You want to know more about Mad Max (film)?

This page is based on the article Mad Max (film) published in Wikipedia (as of Jan. 08, 2021) and was automatically summarized using artificial intelligence.