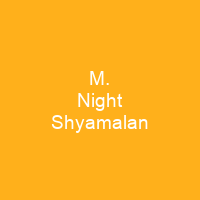 M. Night Shyamalan is an American filmmaker, philanthropist, and actor. He is known for making original films with contemporary supernatural plots and twist endings. His most well-received films include the supernatural thriller The Sixth Sense, the superhero thriller Unbreakable, and the science fiction thriller Signs. His next two motion pictures are slated to be released under Universal in 2021 and 2023.

About M. Night Shyamalan in brief

Manoj Nelliyattu \”M. Night\” Shyamalan is an American filmmaker, philanthropist, and actor. He is known for making original films with contemporary supernatural plots and twist endings. He was born in Mahé, Pondicherry, India, and raised in Penn Valley, Pennsylvania. He made his directorial debut in 1992 with his first movie Praying with Anger. His most well-received films include the supernatural thriller The Sixth Sense, the superhero thriller Unbreakable, and the science fiction thriller Signs. His next two motion pictures are slated to be released under Universal in 2021 and 2023. In 2008, he was awarded the Padma Shri by the government of India for his contributions to philanthropic causes. He has also directed the critically acclaimed series Servant and Wayward Pines. His films are co-produced and released by Walt Disney Studios’ Touchstone and Hollywood Pictures and Universal imprints. He attended the private Roman Catholic grammar school Waldron Mercy Academy, followed by the Episcopal Academy, a private Episcopal high school located at the time in Merion Station, Pennsylvania, in the late 1980s and early 1990s. His parents emigrated to the United States when he was six weeks old. He graduated from New York University Tisch School of the Arts in Manhattan, graduating in 1992. It was while studying there that he adopted \”Night\” as his second name. His father is a Malayali neurologist from Mahé and his mother, Dr.

Jayalakshmi, an ethnic Tamil, is an OB-GYN. He had an early desire to be a filmmaker when hewas given a Super 8 camera at a young age. By the time he was seventeen, he had made forty-five home movies. On each DVD release of his films, beginning with The SixthSense and with the exception of Lady in the Water, he has included a scene from one of these childhood movies, which, he feels, represents his first attempt at the same kind of film. He also wrote and directed his second movie, the semi-autobiographical drama Praying With Anger, while still a student at NYU, using money borrowed from family friends and family friends. The drama dealt with a ten-year-old Catholic schoolboy who searches for God after the death of his grandfather. The film’s supporting cast included Dana Delany and Denis Leary as boy’s parents, as well as Julia Rosie O’Donnell, Camryn Stiles, and Camryn Manheim. He earned the Young Artist Award nominations for Best Drama, Best Performance, and, for Best Cross Performance in limited release, Wide Awake. He received a nomination for Best Director and the Academy Award for Best Original Screenplay for The 6th Sense. For his second film, he wrote, directed and produced the comedy-drama film WideAwake, which earned USD 305 million in limited theaters against a limited release budget of USD 6,704.

You want to know more about M. Night Shyamalan?

This page is based on the article M. Night Shyamalan published in Wikipedia (as of Feb. 11, 2021) and was automatically summarized using artificial intelligence.