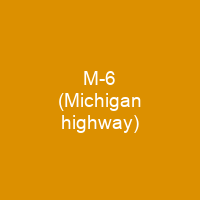 M-6 is a 19.7-mile-long east–west freeway and state trunkline highway in the United States. The freeway connects Interstate 196 on the west with I-96 on the east. M-6 also provides a connection to U.S. Highway 131 in the middle of its corridor.

About M-6 (Michigan highway) in brief

M-6, or the Paul B. Henry Freeway, is a 19.7-mile-long east–west freeway and state trunkline highway in the United States. The freeway connects Interstate 196 on the west with I-96 on the east. M-6 also provides a connection to U.S. Highway 131 in the middle of its corridor while running through several townships on the south side of the Grand Rapids metropolitan area in Western Michigan. Each end is in a rural area while the central section has suburban development along the trunkline. It took 32 years to approve, plan, finance, and build the freeway from the time that the state first authorized funding in 1972 to the time of the ribbon-cutting ceremony in 2004 that opened the South Beltline to traffic. The project cost around USD 700 million or around USD 35 million per mile. Initial construction started in November 1997, with the first phase opened in November 2001. The full freeway was opened to traffic in November 2004. It is the first single-point urban interchange in Michigan, and a new technique to apply the pavement markings, embedding them into the concrete to reduce the chance of a snowplow scraping them off. This interchange stretches over a half mile in one direction and over a mile in the other, encompassing 27 bridges and 18 retaining walls. This makes it the largest freeway interchange in WesternMichigan. There are four overpasses which carry M-5 over the US 131 freeway: two for the main carriageways in each direction and two for the collector-distributor lanes on each side.

In 2011, this area had the highest traffic counts in 2011, at 55,236 vehicles per day. The area had a traffic count of 27,117 vehicles on average per day, the lowest along the freeway, in 2010. On the first to the approach to the East Paris Avenue underpass, the freeway passes through an area with retail businesses and a movie theaters on the northeast side. As the southeast side of R. Gerald Ford International Airport in Cascade Township, it crosses into the southeastside of the South Pointe Pointe Corporate Development Center near the back of one of Steelcase’s office buildings. As it curves around the southeast Side of the Thornapple Pointe R.F.C. building next to the airport, it passes near one of the back sides of a pyramid-shaped corporate development Center. It crosses over Division Avenue and enters Gaines Township through a series of sound barrier walls as the freeway ramps merge back into the main lanes. It then crosses into Caledonia Township, with an interchange for M-37 and an overpass for 60th Street and 60th Avenue. At Kenowa Avenue, the South beltline crosses into Byron Township in Kent County. Continuing east, the beltline curves to the southeast and into the cloverleaf interchange complex at US  131. At Byron Center Avenue, there are two hospitals, Metro Health and St. Mary’s Southwest, the former located on the very southern edge of the city of Wyoming.

You want to know more about M-6 (Michigan highway)?

This page is based on the article M-6 (Michigan highway) published in Wikipedia (as of Dec. 07, 2020) and was automatically summarized using artificial intelligence.