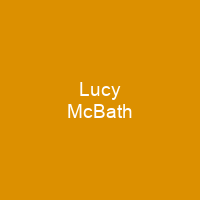 Lucia Kay McBath is an American politician serving as the U.S. Representative for Georgia’s 6th congressional district. She is a member of the Democratic Party. Her son, Jordan Davis, was murdered in November 2012.

About Lucy McBath in brief

Lucia Kay McBath is an American politician serving as the U.S. Representative for Georgia’s 6th congressional district. She is a member of the Democratic Party. Her son, Jordan Davis, was murdered in November 2012. She became an advocate for gun control, joining other mothers of African-American murder victims to form the Mothers of the Movement, and spoke at the 2016 Democratic National Convention. She ran for the House of Representatives in 2018 and defeated Republican incumbent Karen Handel. At the time of taking office, Mcbath was the first African- American woman representing Georgia in Congress since Cynthia McKinney. She was described as the first Democrat to represent this district since Newt Gingrich won it in 1978. She moved to Atlanta’s northern suburbs in 1993 and became the first Democrats to garner even 40 percent of the vote in a general election for the district since Gingrich left office in 1999. She has also appeared in a 2015 documentary film, 3 12 Minutes, 10 Bullets, in which Rob Schenck, a pro-life Evangelical minister, discusses gun violence in America; The Armor of Light won an Emmy Award for Outstanding Social Issue Documentary.

McBATH has a sister, Lori, and a brother, Lucien Holman, who worked as a dentist. She attended Virginia State University and graduated with a bachelor’s degree in political science in 1982. In the 1990s, she became a flight attendant for Delta Air Lines and relocated to Atlanta, where Delta is headquartered. She decided to run for office after the Stoneman Douglas High School shooting. She campaigned actively for Hillary Clinton in the 2016 presidential election and spoke on her behalf at the DNC. She also helped defeat legislation in the Florida Legislature that would expand campus carry. She created a foundation, Champion In The Making Legacy, to help high school graduates continue their education and training. The shooting and its aftermath received national attention and prompted discussion about controversial self-defense laws, commonly known as stand-your-ground laws.

You want to know more about Lucy McBath?

This page is based on the article Lucy McBath published in Wikipedia (as of Jan. 11, 2021) and was automatically summarized using artificial intelligence.