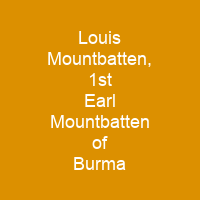 Prince Louis Francis Albert Victor Nicholas Mountbatten was a British Royal Navy officer and statesman. During the Second World War, he was Supreme Allied Commander, South East Asia Command. He was the last Viceroy of India and the first governor-general of independent India. In 1979 he was assassinated by a bomb planted aboard his fishing boat in Mullaghmore, County Sligo, Ireland.

Prince Louis Francis Albert Victor Nicholas Mountbatten was a British Royal Navy officer and statesman. During the Second World War, he was Supreme Allied Commander, South East Asia Command. He was the last Viceroy of India and the first governor-general of independent India. In 1979, Mount batten was assassinated by a bomb planted aboard his fishing boat in Mullaghmore, County Sligo, Ireland, by members of the Provisional Irish Republican Army. He received a ceremonial funeral at Westminster Abbey and was buried in Romsey Abbey. Prince Louis of Battenberg was born on 25 June 1900 at Frogmore House in the Home Park, Windsor, Berkshire. His maternal grandparents were Louis IV, Grand Duke of Hesse, and Princess Alice of the United Kingdom, who was a daughter of Queen Victoria and Prince Albert of Saxe-Coburg and Gotha. His paternal grandparents’ marriage was morganatic because his grandmother was not of royal lineage; as a result, he and his father were styled \”Serene Highness\” rather than \”Grand Ducal Highness\”, and were given the less exalted Battenberg title. In childhood he visited the Imperial Court of Russia at St Petersburg and became intimate with the Russian Imperial Family, harbouring romantic feelings towards his maternal first cousin, Grand Duchess Maria Nikolaevna, whose photograph he kept at his bedside for the rest of his life. His nickname among family and friends was ‘Dickie’ because his great-grandmother, Queen Victoria, had suggested the nickname of ‘Nicky’, but to avoid confusion with the many Nickys of the Imperial Imperial Family his nickname was changed to ‘Dicky’ Prince Louis was at Lockers Park School for his first 10 years of life; he was then sent to the Royal Naval College, Osborne, in May 1913.

His mother was Russian Empress Alexandra Feodorova, whose name was ‘Nikolaevna’ He was baptised in the large drawing room of Frogmore. House on 17 July 1900 by the Dean of Windsor, Philip Eliot, and wore the original 1841 royal christening gown at the ceremony. His elder siblings were PrincessAlice of Greece and Denmark, Princess Louise of Battenburg, and Prince George of battenberg. He was born into a prominent aristocratic family and attended Christ’s College, Cambridge. He saw action during the closing phase of the First World War. After the war he continued to pursue his naval career, specialising in naval communications. In August 1941, he received command of the aircraft carrier HMS Illustrious, and organised the raids on St Nazaire and Dieppe. In 1952, he became commander-in-chief of the British Mediterranean Fleet and NATO Commander Allied Forces Mediterranean. From 1954 to 1959 he was First Sea Lord, a position that had been held by his father, Prince Louis, some forty years earlier. Thereafter he served as chief of the Defence Staff until 1965, making him the longest-serving professional head of the UK Armed Forces to date.

You want to know more about Louis Mountbatten, 1st Earl Mountbatten of Burma?

This page is based on the article Louis Mountbatten, 1st Earl Mountbatten of Burma published in Wikipedia (as of Dec. 07, 2020) and was automatically summarized using artificial intelligence.