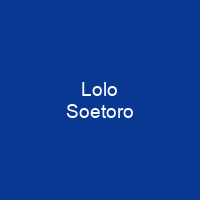 Lolo Soetoro Mangunharjo was born in Bandung, West Java, Dutch East Indies. He and Ann Dunham met at the East-West Center while both were students at the University of Hawaii. They married in 1965, and had a daughter, Maya Kasandra, in August 1970.

About Lolo Soetoro in brief

Lolo Soetoro Mangunharjo (2 January 1935 – 2 March 1987) was an Indonesian who once became the stepfather of Barack Obama, the 44th President of the United States. He was born in Bandung, West Java, Dutch East Indies, the ninth of 10 children of Martodihardjo, an employee of a mining office from Yogyakarta. His father and eldest brother were killed during the Indonesian National Revolution, when Indonesia won independence from the Dutch, and the Dutch army burned the family’s home. He and Ann Dunham met at the East-West Center while both were students at the University of Hawaii. They married in Hawaii on 15 March 1965, and had a daughter, Maya Kasandra, in August 1970. Obama spent the summer in Hawaii with his grandparents, Stanley and Madelyn Dunham, and interviewed for admission to the Punahou School in Honolulu.

In mid-1971, Obama moved back to Hawaii to live with his parents and attend PunahOU School starting in 5th grade. A year later, Dunham, with the help of her employer, obtained a grant to begin graduate study in anthropology. In December 1974, after three years in Hawaii, she returned with her daughter to Jakarta to complete her contract with LPPM and do field work. In 1976, Dunham and her daughter moved to Yogyaksarta for half a year living with her father and his mother, and then to Hawaii where they rejoined Obama for high school.

You want to know more about Lolo Soetoro?

This page is based on the article Lolo Soetoro published in Wikipedia (as of Nov. 18, 2020) and was automatically summarized using artificial intelligence.