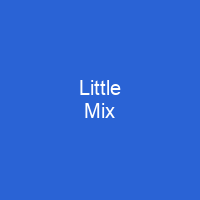 Little Mix are a British girl group formed in 2011 during the eighth series of The X Factor. The group is composed of Jade Thirlwall, Perrie Edwards and Leigh-Anne Pinnock. Former member Jesy Nelson left the group in 2020 due to mental health issues. As of August 2018, Little Mix have four platinum certified albums and sixteen certified singles in the UK.

About Little Mix in brief

Little Mix are a British girl group formed in 2011 during the eighth series of the British version of The X Factor. The group is composed of Jade Thirlwall, Perrie Edwards and Leigh-Anne Pinnock; former member Jesy Nelson left the group in 2020 due to mental health issues. They are known for their strong vocals and signature harmonies, as well as their representative songs about female empowerment and unity. As of August 2018, Little Mix have four platinum certified albums and sixteen certified singles in the UK. Throughout their career, the group has sold over 50 million records worldwide, making them one of the best-selling girl groups of all time. They have also received four MTV Europe Music Awards, two Teen Choice Awards, five Global Awards and nine Brit Award nominations. Little Mix appeared on Debrett’s 2017 list of the most influential people in theUK, Forbes’ 30 under 30 list in 2018, on the Sunday Times Young Rich List for four consecutive years; 2017, 2018, 2019, 2020. In October 2011, it was announced that the group’s new name would be \”Little Mix\”. On November 20, 2011, they became the first girl group in the show’s history to progress past the seventh live show. The previous longest-surviving girl groups were The Conway Sisters and Hope, who had both lasted until the 7th week of the competition. During the semi-final stage of the show, they performed The Supremes’ ‘You Keep Me Hangin’ On’ and Beyoncé’s ‘If I Were a Boy’ Their performance of ‘You Were a Girl’ received mostly positive feedback from the judges, with Gary Barlow calling them the ‘best girl band that’s ever been on X Factor’ The group have won four Brit Awards, including Song of the Year for ‘Shout Out to My Ex’ in 2017 and the Brit Award for British Video of the year for ‘Woman Like Me’ in 2019.

Their fourth album, Glory Days, became the longest-reigning girl group number one album since the Spice Girls’ debut album 20 years earlier, and the highest first week UK album sales for a girl band since 1997. Their Glory Days Tour and Get Weird Tour are the fifth and eighth highest-grossing tour for a girls group of alltime, respectively, with the latter being the biggest-selling UK arena tour of 2016. They also won the Brit Awards for ‘Best Group’ and ‘Best Song’ in 2013. In April 2013, they were named as the first group to win the X Factor in a poll conducted by The Mail on Sunday. They were also named as one of The Sunday Times’ ‘Young Rich List’ for four straight years; 2013, 2014, 2015, 2016, and 2017. In May 2013, the band was named as ‘The X Factor’s Best Girl Group’ for the fourth consecutive year. In August 2013, it emerged that they had changed their name from ‘Little Mix’ to ‘Rhythmix’

You want to know more about Little Mix?

This page is based on the article Little Mix published in Wikipedia (as of Dec. 26, 2020) and was automatically summarized using artificial intelligence.