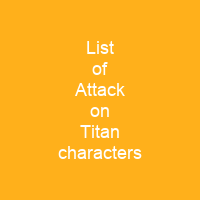 The Attack on Titan manga and anime series feature an extensive cast of fictional characters created by Hajime Isayama. The story is set in a world where humanity lives in cities surrounded by enormous walls; a defense against the Titans. The military within the Walls is divided into three divisions: the Garrison Regiment, the Survey Corps, and the Military Police Brigade.

About List of Attack on Titan characters in brief

The Attack on Titan manga and anime series feature an extensive cast of fictional characters created by Hajime Isayama. The story is set in a world where humanity lives in cities surrounded by enormous walls; a defense against the Titans, gigantic humanoids that eat humans seemingly without reason. The military within the Walls is divided into three divisions: the Garrison Regiment, the Survey Corps, and the Military Police Brigade. The Survey Corps Special Operations Squad is a squad of four elite soldiers with impressive combat records hand-picked by Captain Levi. The Garrison Regiment are the soldiers that protect the towns and reinforce the Walls, maintaining a defensive stance. The Military Police brigade is a gendarmerie composed of soldiers assigned to watch over the Training Corps, supervise the fire departments, and arrest and detain political criminals and offenders. The First Interior Squad, also known as the Interior Police, is a secret police division that operates completely independently from the main body of the military. No one is officially overseeing their activities and they operate as if they are above the law, even if someone is often unaware of their actions until their actions are revealed. The top ten of each training class are eligible to join, although they do not experience front-line combat with the Titans. In the manga, the top ten cadets were listed by their individual ranks but in the anime, thetop ten are recognized as a group, along with Armin and Ymir. The 104th Training Corps is the only graduating class introduced in the series and the southern division contains nearly all of the central characters.

It was active during the years 847 through 850 when the remaining recruits graduated. It is later revealed that the area where the Walls are located is called Paradis and that it is the last territory of Eldia. There are other empires outside the walls, namely Marley, which has infiltrated Paradis with its Titan Shifters. It became the last. territory of the Empire of Eldia after the Great Titan War and hosts refugees mainly consisting of ethnic Eldians. The island is modeled after Madagascar. All the original members of the squad, except for Levi and Eren, are killed by the Female Titan during the 57th expedition to Wall Maria. They are an integral component in the military’s campaign to recapture Wall Maria and are shown to be far more skilled and disciplined than the rest of the other military branches. They are the largest force in themilitary due to the small exclusive number of members in the Military police Brigade and the high death rate of the Survey corps. The other graduates can only choose between joining the Survey. Corps or the Garrison. Regiment, and often reside in the comfort and safety of the innermost wall. The survey Corps’ insignia is an overlapping pair of wings known as the “Wings of Freedom’”. The survey corps is composed of expeditionary soldiers that venture outside the Walls. Their goal is to discover more about the origins and source of the Titans,. their motives, and weaknesses; ultimately how to fight and defeat them.

You want to know more about List of Attack on Titan characters?

This page is based on the article List of Attack on Titan characters published in Wikipedia (as of Dec. 08, 2020) and was automatically summarized using artificial intelligence.