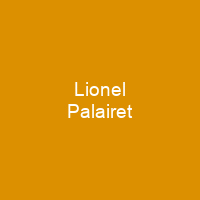 Lionel Charles Hamilton Palairet was an English amateur cricketer. He played first-class cricket for Somerset and Oxford University. His highest score, 292 runs against Hampshire in 1895, remained a record for a Somerset batsman until 1948. He was selected to play Test cricket for England twice in 1902.

About Lionel Palairet in brief

Lionel Charles Hamilton Palairet was an English amateur cricketer. He played first-class cricket for Somerset and Oxford University. A graceful right-handed batsman, he was selected to play Test cricket for England twice in 1902. He passed 1,000 runs in a season on seven occasions, and struck two double centuries. His highest score, 292 runs against Hampshire in 1895, remained a record for a Somerset batsman until 1948. His only Test matches were the fourth and fifth Tests against Australia in 1902: Australia won the fourth Test by three runs, and England won the fifth Test by one wicket. He retired from first- class cricket in 1909, having scored over 15,000 Runs. He was one of the leading amateur batsmen in England during the 1880s and 1890s. He is buried in Cattistock, Dorset, where he lived with his wife and two children. His father, of Huguenot ancestry, was five times archery champion of England, and made two appearances for the Marylebone Cricket Club in the late 1860s. His mother, Elizabeth Bigg, was also a keen cricketers, and played for the MCC in the 1870s and 1880s. Her father paid the professionals Frederick Martin and William Attewell, both later Wisden Cricketers of the Year, to bowl at his two sons during the Easter holidays, to help them prepare for the upcoming cricket season.

He once took seven wickets in seven successive deliveries, and once played cricket in the school’s first eleven from 1886 to 1889, captaining the team in his final two years at Repton School. In 1889 he was adjudged the school’s second best sportsman, behind only C. B. Fry. He had a batting average of over 29, and took 56 wickets at an average of under 13 during his final year at the school. He made his first class debut against the touring Australians in May 1890, and improved, top-scoring with 54 runs in his first half-century in Oxford in their first innings against the Gentlemen of England. In his next match, he scored 54 runs at number eight, and was the highest scorer in Oxford’s second team. In 1892, he shared a partnership of 346 for the first wicket with Herbie Hewett, an opening stand that remains Somerset’s highest first-wicket partnership. In that season he was named as one of the \”Five Batsmen of the year\” by Wisden. He died in Dorset in 1998, aged 87. He left a will of £1,000. He and his wife had two children, a son, a daughter, and a son-in-law, all of whom were all born in the south-west of England in the 1960s and 1970s. The couple had no children of their own, but had a son and a daughter together, who was born in London in the 1980s.

You want to know more about Lionel Palairet?

This page is based on the article Lionel Palairet published in Wikipedia (as of Nov. 23, 2020) and was automatically summarized using artificial intelligence.