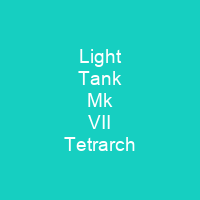 The Light Tank Mk VII, also known as the Tetrarch, was a British light tank produced by Vickers-Armstrongs in the late 1930s. It improved upon its predecessor, the Mk VIC Light Tank, by introducing the extra firepower of a 2-pounder gun. The Tank was deemed obsolete by 1946; the last one was retired from service in 1950, and it is no longer available to buy today.

The Light Tank Mk VII, also known as the Tetrarch, was a British light tank produced by Vickers-Armstrongs in the late 1930s and deployed during the Second World War. It improved upon its predecessor, the Mk VIC Light Tank, by introducing the extra firepower of a 2-pounder gun. The War Office ordered 70 tanks, an order that eventually increased to 220. The tank’s design flaws, combined with the decision by the War Office not to use light tanks in British armoured divisions, ruled out the use of Tetrarchs in the North African Campaign. The majority of the tanks remained in Britain, although 20 were sent to the USSR as part of the Lend-Lease program. By August 1944, most of the Tetrarchs in action were replaced with Cromwell cruiser tanks, and the remainder were replaced by the M22 Locust in December 1944. The last was retired in 1950. There were several variations of the design, including the Alecto self-propelled gun and the Light Tanks Mk VIII, but none of these were ever used in active service with the British Army. The prototype weighed approximately 16,800 pounds and was powered by a 165-horsepower Meadows engine. Suspension was on eight road wheels, four per side, with no separate driver or idler wheels and it was capable of a 40 miles per hour top speed. The Mk VII design relied on an unusual steering method and a mechanical system incorporated into earlier Vickers models.

It was also designed on air struts with pockets of springing and cushions for oil for damping, and each of the wheels was independently steered. Despite this, it was decided that it was essential for some Tetrarchy models to be produced in 1938, when it was suggested it was not acceptable as a light cruiser. The Tank was deemed obsolete by 1946; the last one was retired from service in 1950, and it is no longer available to buy today. It has been preserved in a museum at the Vickers Tank Museum, near Cheltenham, Gloucestershire, where it is on display alongside a number of other examples of Vickers light tanks from the 1920s and 1930s. It is also on display at the National Museum of War and Technology, in London, which is open to the public. The museum is also home to a collection of photographs of the British armed forces from the First World War, including some from World War II. It also has a large collection of war-era memorabilia, including photographs from the Battle of the Bulge and the First Gulf War, as well as a large number of photos of the Second Airborne Division in action in the 1940s and 1950s. The Museum is also the only place in the UK to display the remains of the First Airborne Regiment, which was disbanded after the end of the war in August 1945. The memorial is located in the grounds of the Royal Artillery Museum, London, and is open for visitors.

This page is based on the article Light Tank Mk VII Tetrarch published in Wikipedia (as of Oct. 31, 2020) and was automatically summarized using artificial intelligence.