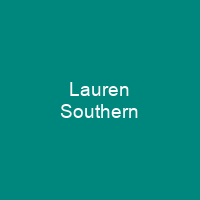 Lauren Cherie Southern is a Canadian political activist and YouTuber. She has been described as alt-right and a white nationalist. In 2015, Southern ran as a Libertarian Party candidate in the Canadian federal election. In 2017, Southern supported the white Identitarian group Defend Europe opposing the action of non-governmental organizations involved in search-and-rescue operations.

About Lauren Southern in brief

Lauren Cherie Southern is a Canadian political activist and YouTuber. She has been described as alt-right and a white nationalist. In 2015, Southern ran as a Libertarian Party candidate in the Canadian federal election. In 2017, Southern supported the white Identitarian group Defend Europe opposing the action of non-governmental organizations involved in search-and-rescue operations in the Mediterranean Sea. In March 2018, she was questioned under the UK Terrorism Act and barred from entering Britain because of her intentions during her March visit. In August 2018, her attempted speaking tour of New Zealand was unsuccessful. In October 2016, Southern had her gender legally changed to male as part of a video produced for The Rebel Media to show the ease of Ontario’s new gender ID laws. Southern announced her retirement from political activism on 2 June 2019. She announced her return to YouTube on 19 June 2020. Southern is known for her promotion of the Great Replacement conspiracy theory via a YouTube video of the same name she released in July 2017. The video helped to popularize the white supremacist conspiracy theory. In January 2017, she posted to Twitter incorrect rumours from the website 4chan that the Quebec City mosque shooting had been carried out by Syrian refugees; she later deleted those tweets. In May 2017,Southern, along with Martin Sellner and Brittany Sellner, took part in an attempt to block the passage of an NGO ship, the Aquarius, which was leaving to start a rescue mission for ship-wrecked refugees and migrants off the shores of Northern Africa.

Claiming that activists were trying to stop an empty boat from going down to Libya and filling up with illegal migrants, Southern was briefly detained by the Italian Coast Guard. In July 2017, it was revealed that Southern had deleted her account citing concerns that she had raised funds in order to take part in part of her activities. She later revealed that her account had been taken down due to concerns about her activities in part. In April 2017, Southern was one of several scheduled speakers at a Patriots’ Day rally in Berkeley, California, which led to a riot between pro-Trump demonstrators and anti-Trump counter-protesters. In June 2015, while reporting on the Vancouver SlutWalk, Southern’s cameraman was shoved and Southern’s protest sign stating \”There Is No Rape Culture in the West\” was torn up. In February 2016, a protester in Vancouver poured an unknown liquid over Southern’s head while she was engaging with LGBTQ protesters at a rally in Vancouver, arguing for two human genders. Southern was mistakenly suspended from Facebook, having criticized the site for banning several conservative commentators. She later received an email apology from Facebook saying the suspension was an \”error\”. In March 2016, she gained access to White House press briefings. She was briefly removed by the party as a candidate but was eventually reinstated with support from Breitbart News and The Rebel media.

You want to know more about Lauren Southern?

This page is based on the article Lauren Southern published in Wikipedia (as of Nov. 29, 2020) and was automatically summarized using artificial intelligence.