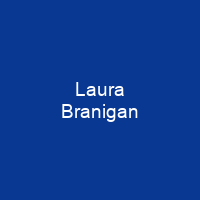 Laura Ann Branigan (July 3, 1952 – August 26, 2004) was an American singer, songwriter, and actress. Her signature song, the platinum-certified 1982 single ‘Gloria’, stayed on the U.S. Billboard Hot 100 for 36 weeks. Branigan’s other singles included the Top 10 hit ‘How Am I Supposed to Live Without You’ and ‘The Power of Love’

About Laura Branigan in brief

Laura Ann Branigan (July 3, 1952 – August 26, 2004) was an American singer, songwriter, and actress. Her signature song, the platinum-certified 1982 single ‘Gloria’, stayed on the U.S. Billboard Hot 100 for 36 weeks. Branigan’s other singles included the Top 10 hit ‘How Am I Supposed to Live Without You’ and ‘The Power of Love’ Her most successful album was 1984’s platinum-selling Self Control. She also contributed songs to motion picture and television soundtracks, including the Grammy and Academy Award-winning Flashdance soundtrack and the Ghostbusters soundtrack. She died at her home in August 2004 from a previously undiagnosed cerebral aneurysm. She was the fourth of five children of Kathleen O’Hare Branigan and James Branigan, Sr. , an account executive and mutual funds broker; they later separated. She attended Byram Hills High School from 1966 to 1970, starring in the high school musical The Pajama Game in her senior year. In 1972 she met acoustic guitarist Walker Daniels and his future wife Sharon Storm, and acoustic guitarist Chris Van Cleave, forming the folk-rock band Meadow. In 1973 the group, with bass player Bob Valdez, released their debut album The Friend Ship, featuring the singles When You Were Young, and Cane and Able, which featured the hook line ‘Throw away your cane and you are able’ The record was not properly promoted and never re-released.

In December 1978 after meeting him at a party, Branigan married Larry Ross Kruteck, a lawyer who died of colon cancer on June 15, 1996, after a party on her return from Europe. The strength of her voice actually impeded her career for several years. She retired from public life for the rest of the 1990s. She began returning to performing in the early 2000s, most notably appearing as Janis Joplin in the off-Broadway musical Love, Janis. Her music saw renewed popularity and public interest in 2019 in the US after ‘G Gloria’ was adopted by the NHL’s St. Louis Blues as their unofficial victory song while they completed a historic mid-season turnaround to win their first Stanley Cup in franchise history, leading to the song entering ice hockey lore as an \”unlikely championship anthem\”. In 1985, she won the Tokyo Music Festival with the song ‘The Lucky One’ Branigan preferred not to discuss her involvement with Meadow publicly. During the years after Meadow broke up, she had various jobs, including a stint as one of Leonard Cohen’s backup singers for his European tour in April–August 1976. In 1979, a chance meeting with manager Sid Bernstein led to Branigan being signed by Atlantic Ahmet Ertegun Records. None of her first three singles were on her first album, Silver Dreams, while the first three of these included ‘Fool’s Affair’, ‘Tell Him’, and ‘Shattered Glass’

You want to know more about Laura Branigan?

This page is based on the article Laura Branigan published in Wikipedia (as of Jan. 11, 2021) and was automatically summarized using artificial intelligence.