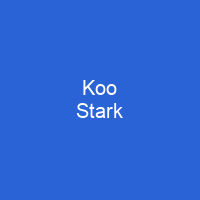 Kathleen Norris Stark, better known as Koo Stark, is an American photographer and actress. Her best remembered performance is the lead role in the avant-garde film Emily. She played Miss Scarlett in the 1991 series of Cluedo, succeeding Toyah Willcox.

About Koo Stark in brief

Kathleen Norris Stark, better known as Koo Stark, is an American photographer and actress. She is a patron of the Julia Margaret Cameron Trust, museum of the Victorian pioneer photographer. Stark has worked as a photographer since the 1980s, and may have been the first person to turn the tables on the pursuing paparazzi by taking photos of them. Her early photographs led to a book deal, for which she took lessons from Norman Parkinson. She went on to study the work of leading photographers, including Angus McBean, and developed her interests in photography to include reportage, portraits, landscapes, still life, and other work. Her best remembered performance is the lead role in the avant-garde film Emily, directed by Henry Herbert, 17th Earl of Pembroke. She played Miss Scarlett in the 1991 series of Cluedo, succeeding Toyah Willcox and befriending Rula Lenska.

She also appeared in Cruel Passion, a film based on the novel Justine, and Star Wars: Behind the Magic. In September 1987, she returned to the stage, taking the part of Vera Claybourne in Agatha Christie’s And Then There Were None at the Duke of York’s Theatre. She appeared in the comedy Eat the Rich, and then featured in an episode of the sci-fi show Red Dwarf, playing Lady Sabrina Mulholland-Jjones, the fiancée of a more successful Dave Lister in a parallel universe. In 1994, she hosted an exhibition at the Gallery at Grosvenor House in Park Lane, London. In 1998, her work was featured in a charity auction at Christie’s St James’s St. James’s, for the Campaign to Protect Rural England, signed by David Bailey, Patrick Lichfield and David Bailey.

You want to know more about Koo Stark?

This page is based on the article Koo Stark published in Wikipedia (as of Nov. 29, 2020) and was automatically summarized using artificial intelligence.