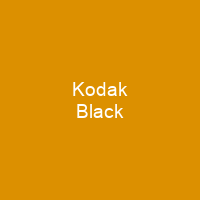 Bill Kahan Kapri, known as Kodak Black, is an American rapper, singer and songwriter. His debut album Painting Pictures peaked at number 3 on the US Billboard 200. He is a member of the rap group Brutal Youngnz, under the stage name J-Black. He signed a deal with Atlantic Records in May 2016.

About Kodak Black in brief

Bill Kahan Kapri, known as Kodak Black, is an American rapper, singer and songwriter. His debut album Painting Pictures peaked at number 3 on the US Billboard 200 and included the Billboard Hot 100 top 10 single \”Tunnel Vision\”, while his second album Dying to Live peaked at no one on the Billboard 200. In May 2016, he was featured on French Montana’s single Lockjaw, which reached a peak position of 23 on Billboard’s Hot R&BHip-Hop Songs chart. He was named one of XXL magazine’s \”2016 Freshman Class” in June 2016. In November 2017, he released a deluxe version of Project Baby titled Project Baby 2: All Grown Up. He released the single “Can I” while he was in jail on February 17, 2017. In August 2016, a studio session video was released showing him ridiculing dark-skinned black women with lyrics which implied those women were less attractive than light- skinned black women. This is considered a type of misogynoir—anti-Black hatred towards women. In March 2017, KodakBlack released his studio studio album, Painting Pictures, which sold 71,000 equivalent units first week. He has also released two mixtapes, Project Baby 1 and Project 2, followed in December 2014 with the mixtape Heart of the Projects, and in December 2015 with themixtape Institution.

He signed a deal with Atlantic Records in May 2016. He and rapper and label-mate Lil Uzi Vert announced their intention to partner for a national tour called the \”Parental Advisory Tour\”; however, he did not appear on the tour. In October 2015, Canadian rapper Drake posted a video of himself dancing to one of Kodak Black’s songs, \”Skrt\”, which helped him gain popularity despite objections from other rappers such as Earl Sweatshirt. His single Skrt reached number 10 on Billboard’s \”Bubbling Under R& bhip-hop Singles\” chart. In June 2016, Kodak Black released his fourth mixtape, Lil B. I. G. Pac, which became his first mixtape to chart on Billboard, reaching number 49 on the \”Top R&bHip hop Albums\” chart and number 18 on the Heatseakers Albums chart. On August 18, 2017, he released the song “Grown Up” which debuted at number 27 and peaked atnumber 6, becoming his first top 10 hit on the Billboard Hot 100 and number 17 on the Canadian Hot 100. He is a member of the rap group Brutal Youngnz, under the stage name J-Black. He also used the nickname “Lil’ Black” when he started to rap and later changed his name to Bill K. Kapri. In 2009, at age 12, he joined a rap group called Brutal Youngnz, under the stage name “J-Black”

You want to know more about Kodak Black?

This page is based on the article Kodak Black published in Wikipedia (as of Dec. 07, 2020) and was automatically summarized using artificial intelligence.