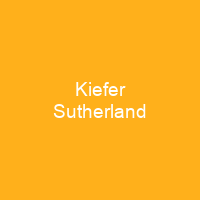 Kiefer William Frederick Dempsey George Rufus Sutherland is a British-born Canadian actor, producer, director, and singer. He is best known for his starring role as Jack Bauer in the Fox drama series 24. Sutherland is named after American-born writer and director Warren Kiefer, who directed Donald Sutherland in his first feature film.

About Kiefer Sutherland in brief

Kiefer William Frederick Dempsey George Rufus Sutherland is a British-born Canadian actor, producer, director, and singer. He is best known for his starring role as Jack Bauer in the Fox drama series 24. Sutherland is named after American-born writer and director Warren Kiefer, who directed Donald Sutherland in his first feature film, Castle of the Living Dead. He was considered for the role of Robin in Batman alongside Michael Keaton, in the early production before the character was deleted from the shooting script. Sutherland has been inducted to the Hollywood Walk of Fame and to Canada’s Walk of Hall Fame, and has received a Lifetime Achievement Award at the Zurich Film Festival. He has also provided the facial motion capture and English voices for Big Boss and Venom Snake in the video games Metal Gear Solid V: Ground Zeroes and Metal Gear solid V: The Phantom Pain. He and Robert Downey, Jr. were roommates for three years when he first moved to Hollywood to pursue his career in acting. Sutherland made his screen debut in Max Dugan Returns, in which his father Donald Sutherland also starred. He starred in the Western film Young Guns alongside Emilio Estevez and Lou Diamond Phillips. In the sequel Young Guns II, Sutherland continued to play the ‘Doc’ role alongside some of the original cast. He also starred as the lead in Flatliners, with an ensemble cast featuring Julia Roberts and Kevin Bacon, a film about a student who wants to experience death and record what happens during it. In 2017, he starred as a lead in the film Flatliners II, which is the only sequel to a feature film he has starred in.

He went on to star in the crime-action film Renegades at the same year he and his father appeared at the 61st Academy Awards as present to the Academy Honorary Award of the National Film Board of Canada. His maternal grandfather was Scottish-born. Canadian politician and former Premier of Saskatchewan Tommy Douglas, who is widely credited for bringing universal health care to Canada. He attended elementary school at Crescent Town Elementary School, St. Clair Junior High East York, and John G. Althouse Middle School in Toronto. He spent a semester at Regina Mundi Catholic College in London, Ontario, and attended weekend acting lessons at Sir Frederick Banting Secondary School. Sutherland was born 21 December 1966, in St Mary’s Hospital, Paddington, London, to Donald Sutherland and Shirley Douglas, both successful Canadian actors who had been living and working in England for some time. He moved to Corona, California, in 1968, and his parents divorced in 1970. Sutherland moved with his mother to Toronto, Ontario in 1975, and he attended several high schools, including St. Andrew’s College, Martingrove Collegiate Institute, Harbord Collegiate. Institute, Silverthorn Collegiates Institute, and Malvern CollegiateInstitute, and Annex Village Campus. He played a silent, supporting character in Sean Penn’s friends who goes up against Christopher Walken in James Foley’s crime-thriller At Close Range.

You want to know more about Kiefer Sutherland?

This page is based on the article Kiefer Sutherland published in Wikipedia (as of Dec. 08, 2020) and was automatically summarized using artificial intelligence.