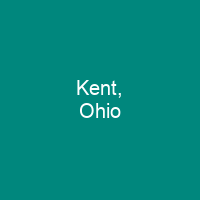 Kent is a city in Portage County in the U.S. state of Ohio. It is the home of Kent State University and the site of the 1970 Kent State shootings. The population was 28,904 in the 2010 Census and was estimated at 29,646 in 2019. The region was originally inhabited by various tribes of American Indians. Settlement by Europeans began in the late 1790s and early 19th century.

About Kent, Ohio in brief

Kent is a city in Portage County in the U.S. state of Ohio. It is the home of Kent State University and the site of the 1970 Kent State shootings. The population was 28,904 in the 2010 Census and was estimated at 29,646 in 2019. The city is governed by a council-manager system with a city manager, a nine-member city council, and a mayor. The region was originally inhabited by various tribes of American Indians, including the early Mound Builders. Settlement by Europeans began in the late 1790s and early 19th century. Kent is part of the Cleveland-Akron media market and is the city of license for three local radio stations and three television stations. It also includes the regional affiliates for National Public Radio and the Public Broadcasting Service. Kent has nearly 20 parks and preserves and hosts a number of annual festivals including ones related to Earth Day, folk music, and U. S. Independence Day. It has a public bus service and hike-and-bike trails. Kent State is one of the region’s, and the city’s, largest employers. The median age, median income, and those living below the poverty level are all below the age of 25 in the city. The average household income in Kent is under $30,000, making the city a low-income city in the national average of $40,000. The area is home to the Davey Tree Expert Company, Kent is known as \”The Tree City\” while residents are referred to as \”Kentites\”. The city has produced anumber of notable individuals, particularly in politics, athletics and the entertainment industry.

Kent was settled in 1805 and was known for many years as Franklin Mills. It was originally part of Town 3 Range 9, which would eventually be known as Franklin Township. Aaron Olmsted, a wealthy Connecticut merchant, had purchased the 16,000-acre township and named it for his son Aaron Franklin Olmstead. In the 1820s, Franklin Mills was included in the Pennsylvania and Ohio Canal. When construction began on the canal in the mid-1830s, speculation was rampant in many areas of northeast Ohio, including Kent. In 1867, Kent was incorporated as a village in 1867 and became a city after the 1920 Census. Today Kent is a college town best known for the main campus of Kent state University, founded in 1910, and as the place of the Kent State shooting. The town is located along the Cuyahoga River as a place for water-powered mills and manufacturing. The growth in the area was slow, but eventually two small villages would develop due to potential potential power generated by the river. The first village, known as the Franklin Mills Village, developed mostly around the original property around the area and began constructing buildings just north of the village forming the \”Upper Village\” that would come to be known briefly as Carthage Village. In 1864 the town was renamed Kent in honor of and in gratitude for Marvin Kent.

You want to know more about Kent, Ohio?

This page is based on the article Kent, Ohio published in Wikipedia (as of Dec. 03, 2020) and was automatically summarized using artificial intelligence.