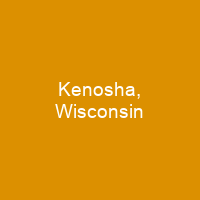 Kenosha is a city in and the county seat of Kenosha County, Wisconsin, United States. With an estimated population of 99,944 as of 1 July 2019, it is the fourth-largest city in Wisconsin. The city is on the southwestern shore of Lake Michigan. Paleo-Indians settled in the area at least 13,500 years ago.

About Kenosha, Wisconsin in brief

Kenosha is a city in and the county seat of Kenosha County, Wisconsin, United States. With an estimated population of 99,944 as of 1 July 2019, it is the fourth-largest city in Wisconsin. The city is on the southwestern shore of Lake Michigan. Once a hotbed of American industrial activity, its gradual transition into a hub for the services-based economy of today has made it a bedroom community within the Chicago and Milwaukee metro areas. It is also home to the University of Wisconsin–Parkside and other educational institutions such as Carthage College, Gateway Technical College, and more. The Potawatomi originally named the area Kenozia, while the early Ojibwa name is reported as Masu-kinoja, which means “trout come all at once”; these refer to the annual spawning of trout, in which thousands of fish enter the rivers from Lake Michigan, providing food for the coming months. Paleo-Indians settled in the area at least 13,500 years ago. The land was ceded by the Potaw atomi in 1833, when they sold the last of their land in Illinois and Wisconsin to the United States, but growing poverty forced them to sell in exchange for territory in Iowa and economic investments in schools and agriculture. The first European settlers, part of the Western Emigration Company, arrived immediately afterward, in the early 1830s, from Hannibal and Troy, New York, led by John Bullen, Jr., who sought to purchase enough land for a town.

As more settlers arrived and the first post office was established, the village was known as Pike Creek, then renamed Southport in 1837, a name which lives on as a southeast-side neighborhood, park, and elementary school, and has been adopted by several businesses. A prototype steam car was built by the Sullivan-Becker engineering firm in 1900. In 1902, Rambler and Oldsmobile were the first cars to employ mass-production techniques. In 1987, Renault sold its controlling interest in AMC Corporation to Chrysler Corporation, which had already contracted with the AMC plant for production of its M-body cars. The AMC Classic had also received the award from the Alliance, which won the 1983 Motor Trend Car of the Year award. In May 1954, Nash acquired Detroit-based Hudson and the new firm was named American Motors Corporation. A 47-acre west side park and an elementary school are named for Charles W. Nash. In 1850, the village changed its name from Southport to Kenos Ha which is its current name. The name KenosHA was adapted from the Chippewa word kinoje. The area became an important Great Lakes shipping port. In the early 1980s, the city was home to a plant that manufactured several models in the AMC M-fronted cars. It also had a plant for the AMC Classic cars at the Lakefront plant. In 1983, AMC’s Classic car plant also had also won the award for the Best Car of The Year award from Alliance.

You want to know more about Kenosha, Wisconsin?

This page is based on the article Kenosha, Wisconsin published in Wikipedia (as of Jan. 06, 2021) and was automatically summarized using artificial intelligence.