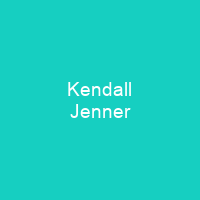 Kendall Nicole Jenner is an American media personality, socialite, and model. She rose to fame in the reality television show Keeping Up with the Kardashians. Jenner made her debut at No. 16 on Forbes magazine’s 2015 list of top-earning models, with an estimated annual income of US$4 million.

About Kendall Jenner in brief

Kendall Nicole Jenner is an American media personality, socialite, and model. She rose to fame in the reality television show Keeping Up with the Kardashians. Jenner made her debut at No. 16 on Forbes magazine’s 2015 list of top-earning models, with an estimated annual income of US$4 million. In 2017, Jenner was involved in a large controversy, after being featured in an insensitive Pepsi commercial. Jenner was born in Los Angeles, California, to retired Olympic decathlete champion Caitlyn Jenner and television personality Kris Jenner. She is half sister to reality television celebrities Kourtney, Kim, Khloé, and Rob Kardashian. Jenner attended Sierra Canyon School before switching to homeschooling in order to pursue modeling. She graduated in 2014. In May 2014, Jenner purchased a two-bedroom, 2. 5-bath condominium in LA for US$1.4 million. In 2015, Jenner walked for Chanel, Alexander Wang, Donna Karan, Diane von Fürstenberg, Michael Kors, Vera Wang, and Dolce & Gabbana. She was hailed as ‘It’ Girl of the season by LOVE editor Katie Salzburg. In November 2014, she became an official Estée Lauder representative. She has done multiple editorials and cover shoots for LOVE and various international Vogue editions, and is a brand ambassador for Estee Lauder. In 2007, Jenner, along with her parents and siblings, began appearing in thereality television series Keeping Up With the Kardashian, which chronicles the personal and professional lives of their family members.

The series was successful for its network, E!, and has resulted in the creation of numerous spin-offs including Kourtneys and Kim Take Miami, Khloeé & Lamar, Kourtny and Kim take New York, andKourtney and Khloés Take The Hamptons. In 2012, Jenner teamed with Victoria’s Secret photographer Russell James for editorial work and joint projects. In 2013, Jenner signed with The Society Management on November 21, 2013. By the end of 2012, she had covers on American Cheerleader, Teen Prom, Looks, Raine, GenLux, Lovecat, and Flavour Magazine and booked campaigns for White Sands Australia, Leah Madden, and Agua Bendita. In September 2011, she walked for Sherri Hill during Mercedes-Benz Fashion Week. In December 2013, she featured in a Teen Vogue Snapshot on April 19, 2010. She walked her first Society Management bookings for Marc Jacobs, Giles Deacon, Givenchy and Chanel. In two 2014 Chanel and Balmain events, she participated in a feminist public relations events: one, a feminist rally-themed rally-Art in Metzburg; and two, the company’s Dzburg’Art in Dordrechtburg event. In January 2015, she was cast in campaigns for Givenchy, Doug Inglish and a December-themed advent-themed calendar with Givenchy.

You want to know more about Kendall Jenner?

This page is based on the article Kendall Jenner published in Wikipedia (as of Dec. 05, 2020) and was automatically summarized using artificial intelligence.