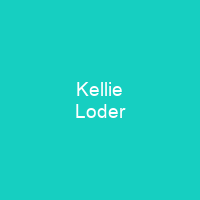 Kellie Loder is an independent singer-songwriter from Newfoundland. She has released three albums: The Way in 2009, Imperfections & Directions in 2010 and Benefit of the Doubt in 2018. Loder has received critical recognition from Canada, including a nomination at the Juno Awards. She plays drums, guitar and piano.

About Kellie Loder in brief

Kellie Loder is an independent singer-songwriter from Newfoundland. She has released three albums: The Way in 2009, Imperfections & Directions in 2010 and Benefit of the Doubt in 2018. Loder has received critical recognition from Canada, including a nomination at the Juno Awards. She plays drums, guitar and piano. Her first song was about a cousin who died in a traffic accident at age 16. She is also a nominee of three MusicNL awards, including Gospel Artist of the Year in 2011. She was born to Christina and Bob Loder in 1988, and was raised in Badger, a town in the Canadian province of Newfoundland and Labrador. She considers her first introduction to music to have taken place before she was born; her mother frequently played Michael W. Smith songs to her through headphones while she was still in the womb. In 2008, while studying nursing at the Grenfell Campus of Memorial University of Newfoundland through the Western Regional School of Nursing, Loder met Devin Robinson, a record producer. The meeting led to him producing her first album, an independent release called The Way, which was recorded at Sweet Music Studios. In 2010, she won a talent-search contest hosted by YC Newfoundland, a Christian youth conference, where she performed. As part of the award, she was given time with music industry and production professionals who helped her with her second album, Im perfections & directions. She also met Tom Newman, who produced the album, and the producers of Laune & Laune in Nashville, Tennessee, who helped Loder with the mixing of Imperfection & Directions.

In 2011, she became a member of the East Coast Music and Music trade associations and was given a membership to both East Coast and MusicNL. She says she chose CCM because it gives purpose to her music. She claims to have ‘natural rhythm’ and that she began emulating the drummer at her Pentecostal church by beating on a pew with pencils at the age of two. She began playing piano at age 14, and credited God with teaching her how to play. The first song she wrote after beginning the piano was \”Giants\”, also for a graduating class; the song uses the story of Goliath as its theme, generalizing the story to apply to each individual’s internal struggles. The Way was released in August 2009, and she subsequently went door-to-door in small Newfoundland communities selling a second run of the album. On her most lucrative day selling albums in this manner, she made USD 1,000. She later said that this manner of selling her album proved to be a good way to develop a fanbase; people invited her into their homes for meals, prayer, and discussions. Her second album was released at the 2010 Yc Newfoundland, and it was nominated for Contemporary ChristianGospel Album of the year at the 2012 Juno Awards, as well as a number of other awards. In 2012, she received a $20,000 prize for her work.

You want to know more about Kellie Loder?

This page is based on the article Kellie Loder published in Wikipedia (as of Nov. 22, 2020) and was automatically summarized using artificial intelligence.