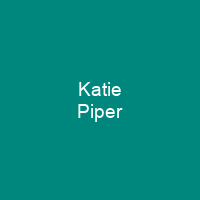 Kate Elizabeth Piper is an English writer, activist, television presenter and model. In March 2008, she was attacked with acid by her ex-boyfriend and an accomplice. Piper underwent pioneering surgery to restore her face and vision. In 2009, Piper gave up her right to anonymity in order to increase awareness about burn victims.

About Katie Piper in brief

Kate Elizabeth Piper is an English writer, activist, television presenter and model. In March 2008, she was attacked with acid by her ex-boyfriend and an accomplice. Piper underwent pioneering surgery to restore her face and vision. In 2009, Piper gave up her right to anonymity in order to increase awareness about burn victims. Her experience was documented in the 2009 Channel 4 documentary Katie: My Beautiful Face part of the Cutting Edge series. Piper has appeared in follow-up series for Channel 4, released a best-selling autobiography, and had a regular column in weekly magazines. She also presents the Channel 4 television series Bodyshockers about members of the public about to undergo body-altering procedures and those who regret procedures they have had. Piper was announced as the first contestant for that year’s Strictly Come Dancing. On 11 September 2020 BBC media announced that Katie Piper would be joining their BBC1 Songs of Praise team as a feature presenter. Piper had previously appeared as a guest, with her mother on the 2020 Mothers Day edition, when she explained the moment she found her faith. She was born in Andover, Hampshire, to David and Diane Piper and attended Harrow Way School and Portway Junior School as a child. After leaving school, Piper trained as a beautician, aiming to build on her fondness for fashion and beauty, and to follow in the footsteps of her father, who worked as a barber. Piper subsequently began a career in modelling, taking part in various fashion, glamour and promotional photoshoots, including modelling for national newspapers.

As her career began to develop, Piper moved away from her family home in Hampshire, and began to live with friends in a flat in Golders Green, North London. Daniel Lynch, a martial arts enthusiast who had been tracking Piper’s media and modelling career, met her through the online social site Facebook. Lynch raped and beat Piper, threatened to cut her with a razor and hang her, and stabbed her several times in the arms. In 2018, one of the attackers was released after serving nine years in prison. Lynch received two life sentences, and will serve a minimum of 16 years. Sylvestre received a life sentence, and was told he would serve 6 years of parole. Immediately after the attack, Piper ran into a local café, where she was treated by Mohammad Ali Jawad. She has been through numerous surgical operations to treat her injuries, and wore a plastic mask, to build the foundations for a skin substitute, Matmrider, to replace the skin. This was the first of its kind to be done in a single operation, and Piper was put into an induced coma for 12 days. The acid, which had swallowed some of her eye, caused partial thickness and full thickness, and caused partial and full burns and caused Piper to be blinded in her left eye. Piper received numerous phone calls and apologies from Lynch, but withheld the nature of the incident from the doctors and police, because she was afraid of Lynch.

You want to know more about Katie Piper?

This page is based on the article Katie Piper published in Wikipedia (as of Jan. 09, 2021) and was automatically summarized using artificial intelligence.