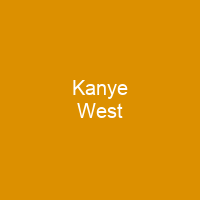 Kanye Omari West is an American rapper, record producer, and fashion designer. He released his debut album The College Dropout in 2004 to critical and commercial success. West has won 21 Grammy Awards, making him one of the most awarded artists of all time. In 2020, he ran an unsuccessful independent presidential campaign.

About Kanye West in brief

Kanye Omari West is an American rapper, record producer, and fashion designer. Born in Atlanta and raised in Chicago, West was first known as a producer for Roc-A-Fella Records in the early 2000s. He released his debut album The College Dropout in 2004 to critical and commercial success. West’s outspoken views and life outside of music have received significant media attention. He has been a frequent source of controversy for his conduct at award shows, on social media, and in other public settings. West has won 21 Grammy Awards, making him one of the most awarded artists of all time. In 2020, he ran an unsuccessful independent presidential campaign that advocated for a consistent life ethic. His Christian faith, as well as his marriage to television personality Kim Kardashian, have also been a source ofmedia attention. West is the founder and head of the creative content company DONDA. His mother, Dr. Donda C. West, was a professor of English at Clark Atlanta University, and the Chair of the English Department at Chicago State University. At the age of 10, West moved with his mother to Nanjing, China, where she was teaching at Nanjing University as part of an exchange program. According to his mother, he was the only foreigner in his class, but settled in well and quickly picked up the language, although he has since forgotten most of it. He is the tied holder for the most albums topping the annual Pazz & Jop critic poll. West started rapping in the third grade and began making musical compositions in the seventh grade, eventually selling them to other artists.

At 13, West wrote a song called \”Green Eggs and Ham and his mother persuaded him to pay for time in a recording studio. He began rapping with No I.D. and DJ D.O.C. at No. 1 in the U.S. and No. 2 in the United Kingdom. He went on to release The Life of Pablo, Ye, and Jesus Is King. West’s discography also includes the full-length collaborations Watch the Throne and Kids See Ghosts with Jay-Z and Kid Cudi, respectively. Six of his albums have been included on Rolling Stone’s 2020 500 Greatest Albums of All Time list; the same publication named him one the 100 Greatest Songwriters of All time. West collaborated with Nike, Louis Vuitton, and A. P. C. on both clothing and footwear, and have most prominently resulted in the Yeezy collaboration with Adidas beginning in 2013. He was named one of 100 most influential people in the world in 2005 and 2015 by Time magazine. West won the Billboard Artist Achievement Award, a joint-record three Brit Awards for Best International Male Solo Artist and the Michael Jackson Video Vanguard Award. In 2006, he opened the Good Water Store and Café in Lexington Park, Maryland, with startup capital from his son. His father, Ray West, is a former Black Panther and was later a Christian counselor, and was one the first black photojournalists at The Atlanta Journal-Constitution.

You want to know more about Kanye West?

This page is based on the article Kanye West published in Wikipedia (as of Jan. 07, 2021) and was automatically summarized using artificial intelligence.