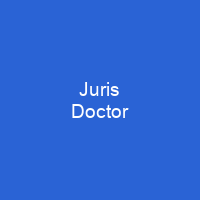 In Australia, Canada, the United States, and some other common law countries, the Juris Doctor is earned by completing law school. The degree was first awarded in the early 20th century and was created as a modern version of the old European doctor of law degree. It is not to be confused with Doctor of Laws or Legum Doctor.

About Juris Doctor in brief

In Australia, Canada, the United States, and some other common law countries, the Juris Doctor is earned by completing law school. It has the academic standing of a professional doctorate in the U.S., a master’s degree in Australia, and a second-entry baccalaureate degree in Canada. The degree was first awarded in the early 20th century and was created as a modern version of the old European doctor of law degree. To be fully authorized to practice law in the courts of a given state in the US, the majority of individuals holding a J. D. degree must pass a bar examination. The state of Wisconsin, however, permits the graduates of its two law schools topractice law in that state, and in its state courts, without having to take its bar exam. The LL. B. was replaced by the J.D. in the US in the later 20th Century. It is not to be confused with Doctor of Laws or Legum Doctor. In institutions where the latter can be earned, e. g. Cambridge University and many other British institutions, it is a higher research doctorate representing a substantial contribution to the field over many years, a standard of professional experience beyond that required for a PhD and academic accomplishment well beyond a professional degree such as the J D. The nature of the degree can be better understood by a review of the context of legal education in England. Professional training for practicing common law in England was undertaken at Inns of Court, but over time the training functions of the Inns lessened considerably and apprenticeships arose as individual practitioners of the law.

The original method of education was a mix of moot court proceedings and lecture-like practice as well as court proceedings. By the fifteenth century, students would hire students to lecture them in their residences, which led to the institution of the Court of Inns. In England in 1292, Edward I requested that lawyers be trained, but the students merely sat in the court and observed the proceedings. This led to a change in the way lawyers were trained, with students merely sitting in courts and observing the courts. In the UK in the same way, in the 19th century, the students would sit in courts, but they would observe the courts and observe the practice of the lawyers in their homes. The students would also sit in court proceedings as well, but this time over time, the practice was more of a moot court-like affair, with the lawyers sitting in their own homes and in their private homes. In Britain in the 1920s and 30s, the courts began to use the courts as a training ground for lawyers, with some students sitting in court for up to two years at a time. The first academic degrees may have been doctorates in civil law followed by canon law. These were not professional degrees but rather indicated that their holders had been approved to teach at the universities. While Bologna granted only doctorates, preparatory degrees were introduced in Paris and then in the English universities. This served as the model for other law schools of the Middle Ages.

You want to know more about Juris Doctor?

This page is based on the article Juris Doctor published in Wikipedia (as of Nov. 17, 2020) and was automatically summarized using artificial intelligence.