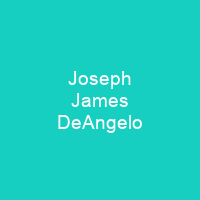 Joseph James DeAngelo Jr. is an American serial killer, serial rapist, burglar, and former police officer. He committed at least 13 murders, 50 rapes, and 120 burglaries across California between 1973 and 1986. DeAngelo was responsible for at least three crime sprees throughout California, each of which spawned a different nickname.

About Joseph James DeAngelo in brief

Joseph James DeAngelo Jr. is an American serial killer, serial rapist, burglar, and former police officer. He committed at least 13 murders, 50 rapes, and 120 burglaries across California between 1973 and 1986. DeAngelo was responsible for at least three crime sprees throughout California, each of which spawned a different nickname in the press, before it became evident that they were committed by the same offender. In 2001, after DNA testing indicated that the East Area Rapist and the Original Night Stalker were the same person, the acronym EARONS came into use. On April 24, 2018, authorities charged 72-year-old DeAngelo with eight counts of first-degree murder, based upon DNA evidence. On June 29, 2020, DeAngelo pleaded guilty to multiple counts of murder and kidnapping. As part of a plea bargain that spared him the death penalty, De Angelo also admitted to numerous crimes with which he had not been formally charged, including rapes. De Angelo was sentenced to life imprisonment without the possibility of parole on August 21, 2020. The case was a factor in the establishment of California’s DNA database, which collects DNA from all accused and convicted felons in California and has been called second only to Virginia’s in effectiveness in solving cold cases. To heighten awareness of the case, crime writer Michelle McNamara coined the name Golden State Killer in early 2013. The Federal Bureau of Investigation and local law-enforcement agencies held a news conference on June 15, 2016, to announce a renewed nationwide effort, offering a USD 50,000 reward for his capture.

Owing to California’s statute of limitations on pre-2017 rape cases, Deangelo could not be charged with 1970s rapes; but he was charged in August 2018 with 13 related kidnapping and abduction attempts. One of DeAngelo’s sisters claimed that he was abused by their father while he was growing up. He has two younger sisters and a younger brother. Prosecutors reported that DeAngelo committed burglaries and tortured and killed animals during his teenaged years. He served for 22 months during the Vietnam War as a damage controlman on the cruiser USS Canberra and the destroyer tender USS Piedmont. He attended Sacramento State University in 1971, where he earned a bachelor’s degree in criminal justice. In 1973, he became engaged to Bonnie Jean Colwell, a classmate at Sierra College; she broke off the relationship after he threatened her with a gun in order to marry him. In October 1973 he married Sharon Marie Huddle in October 1973. He then served as a burglary unit police officer in Exeter, having from August 1976 to July 1979, when he was arrested for shoplifting in Citrus Heights. In May 1970, he threatened to kill the Chief of Police and allegedly stalked the Chief’s house. He later took post-graduate courses and further police training at the College of Sequoias Visalia, then completed a 32-week police internship at the Roseville Police Department in August 1976.

You want to know more about Joseph James DeAngelo?

This page is based on the article Joseph James DeAngelo published in Wikipedia (as of Jan. 04, 2021) and was automatically summarized using artificial intelligence.