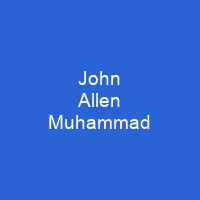 John Allen Muhammad was an American convicted murderer from Baton Rouge, Louisiana. He, along with his partner and accomplice Lee Boyd Malvo, carried out the D. C. sniper attacks of October 2002, killing 10 people. Muhammad was executed by lethal injection on November 10, 2009, at the Greensville Correctional Center near Jarratt, Virginia.

About John Allen Muhammad in brief

John Allen Muhammad was an American convicted murderer from Baton Rouge, Louisiana. He, along with his partner and accomplice Lee Boyd Malvo, carried out the D. C. sniper attacks of October 2002, killing 10 people. Muhammad was executed by lethal injection on November 10, 2009, at the Greensville Correctional Center near Jarratt, Virginia. Born as John Allen Williams, Muhammad joined the Nation of Islam in 1987 and later changed his surname to Muhammad. Muhammad kidnapped his children and took them to Antigua around 1999, apparently engaging in credit card and immigration document fraud. It was during this time that he became close with Lee BoydMalvo, a Jamaican illegal immigrant who later acted as Muhammad’s partner in the killings. Malvo testified that Muhammad had indoctrinated him into believing that the proceeds of an extortion attempt would be used to establish a camp in Canada where homeless children would be trained as terrorists. After his arrest, authorities also claimed that Muhammad admitted that he admired and modeled himself after Osama bin Laden and al-Qaeda and approved of the September 11 attacks. Muhammad declined to make a final statement. He was honorably discharged from the Army with the rank of sergeant on April 24, 1994, after 17 years of service. He received the Army’s highest of three levels of basic rifle marks for a soldier: Expert Rifleman, M16, and Expert Sniper. He died of a lethal injection at 9:06 p.m. EST on November10, 2009. His appeals of his conviction for killing Meyers had been made and rejected.

All appeals for Muhammad’s other trials remained pending at the time of his execution. Muhammad helped provide security for the \”Million Man March\” in 1995. Nation of Muslims leader Louis Farrakhan has publicly distanced himself and his organization from Muhammad’s crimes. Muhammad’s second ex-wife, Mildred Muhammad, sought and was granted a restraining order by possessing a weapon. Under federal law, those with restraining orders are prohibited from purchasing or possessing guns, as per the Lautenberg Amendment to the Gun Control Act of 1968. Muhammad was arrested on federal charges of violating the restraining order and sentenced to death in August 2005. His trial for one of the murders began in October 2003, and the following month he was found guilty of capital murder. In August 2005, he was extradited to Maryland to face some of the charges there. He was convicted of six counts of first-degree murder on May 30, 2006, and was returned to Virginia’s death row pending an agreement with another state or the District of Columbia seeking to try him. This is the highest level of military service a soldier can receive. Muhammad served in the Louisiana Army National Guard at Baton Rouge as a combat engineer. He transferred to the Regular Army on November 6, 1985 and was trained as a mechanic, truck driver and specialist metal worker. In 1992 he was at Fort Ord, California, with the 13th Engineers and was back at Fort Lewis with the 14th Engineer Battalion.

You want to know more about John Allen Muhammad?

This page is based on the article John Allen Muhammad published in Wikipedia (as of Dec. 08, 2020) and was automatically summarized using artificial intelligence.