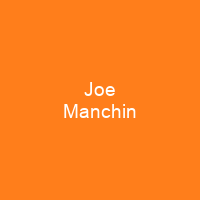 Joseph Manchin III is an American politician serving as the senior U.S. Senator from West Virginia. He was the 34th governor of West Virginia from 2005 to 2010. Manchin is known for his support of bipartisanship, voting or working with Republicans on issues such as abortion and gun ownership.

About Joe Manchin in brief

Joseph Manchin III is an American politician serving as the senior U.S. Senator from West Virginia. He was the 34th governor of West Virginia from 2005 to 2010. Manchin has been described as a moderate or conservative Democrat. He is known for his support of bipartisanship, voting or working with Republicans on issues such as abortion and gun ownership. Since 2017, he has voted with Trump’s positions 52% of the time, the most of any Democrat in Congress. He has been a close friend of Alabama Crimson Tide football coach Nick Saban since childhood. His father owned a carpet and furniture store, and his grandfather, Joseph Manchin, owned a grocery store. His uncle was a member of the West Virginia House of Delegates and later the West West Virginia Secretary of State and Treasurer. The name Manchin was derived from the Italian name \”Mancini\”. His father was of Italian descent and his maternal grandparents were Czechoslovak immigrants. He won the 2004 gubernatorial election by a large margin and was reelected by an even larger margin in 2008; in both years, Republican presidential candidates won WestVirginia. In July 2005, Massey Energy CEO Massey Massey sued Manchin for threatening increased government scrutiny of his coal operations in retaliation for his political activities. In 2005 Massey filed a lawsuit alleging that Manchin had violated the First Amendment rights of Massey CEO Don Blankenship’s coal operations. The lawsuit was settled out of court in August 2005. In 2010, Manchin won the special election to fill the Senate seat vacated by incumbent Democrat Robert Byrd when he died in office.

He became the state’s senior Senator when fellow Democrat Jay Rockefeller retired in 2015. He ran for governor in 1996, losing the Democratic primary election to Charlotte Pritt. In 2003 Manchin announced his intention to challenge incumbent Democratic Governor Bob Wise in the 2004 Democratic primary, and he won the primary and general election by large margins. His election marked the first time since 1964 that a West Virginia governor was succeeded by another governor from the same party. In 1996, he was elected to the West Virginian Senate, where he served until 1996. In 1986, he served as the state’s secretary of state and treasurer. In 2000, he became the first Democrat to serve as West Virginia’s governor in more than 30 years. In 2012, he won a full-term in 2012 with 61% of the vote and reelected with just under 50% of the vote in 2018. In 2015, he voted to remove federal funding for Planned Parenthood in 2015, and voted to confirm most of President Donald Trump’s cabinet and judicial appointees, including Associate Justice Brett Kavanaugh. He voted against attempts to repeal the Patient Protection and Affordable Care Act and voted against the 2017 Republican tax plan. He opposed Medicare For All, abolishing the filibuster, increasing the number of justices on the Supreme Court, and attempts to cut police funding. In 2016, he fought against a proposed severance tax on extraction of mineral resources in the state.

You want to know more about Joe Manchin?

This page is based on the article Joe Manchin published in Wikipedia (as of Dec. 07, 2020) and was automatically summarized using artificial intelligence.