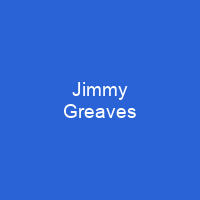 James Peter Greaves is a former England international footballer who played as a forward. He is England’s fourth highest international goalscorer and Tottenham Hotspur’s highest ever scorer. He has also scored more hat-tricks for England than anyone else. Greaves was scouted playing football while a schoolboy by Chelsea’s Jimmy Thompson. He made his debut for Chelsea in August 1957.

About Jimmy Greaves in brief

James Peter Greaves MBE is a former England international footballer who played as a forward. He is England’s fourth highest international goalscorer and Tottenham Hotspur’s highest ever scorer. He has also scored more hat-tricks for England than anyone else. Greaves is a member of the English Football Hall of Fame. After retiring as a player Greaves went on to enjoy a successful career in broadcasting, most notably working alongside Ian St John on Saint and Greavsie from 1985 to 1992. He was scouted playing football while a schoolboy by Chelsea’s Jimmy Thompson. He turned professional in the summer of 1957, though spent eight weeks working at a steel company to supplement his income during the summer break. In a five-year spell he played for Brentwood, Chelmsford City, Barnet, and Woodford Town before retiring for good in 1980. He played in the 1962 and 1966 FIFA World Cup, but was injured in the group stage of the 1966 World Cup and lost his first team place to Geoff Hurst. He also part of the squad that finished third in UEFA Euro 1968, although he did not play any minute in the finals. He won the FA Cup in 1961–62 and 1966–67, the Charity Shield in 1962 and 1967, and the European Cup Winners’ Cup in 1962–63. He moved to West Ham United in a player-exchange in March 1970 and retired the following year. He later worked on a number of other sport programmes on ITV during this period, including Sporting Triangles. Greaves was born in Manor Park and raised in Hainault.

He scored 124 First Division goals in just four seasons before being sold on to Italian club A. C. Milan for £80,000 in April 1961. He finished as the First Division’s top scorer in six seasons. He made his debut for Chelsea in August 1957. Aged 17, Greaves scored on his First Division debut on 24 August 1957 in a 1–1 draw at White Hart Lane. He was an instant success, as the News Chronicle reported that he showed the ball control, confidence and positional strength of a seasoned campaigner and compared his debut to the instant impact the young Duncan Edwards had as a teenager. The 24-year-old scored 13 goals in 12 England under-23 internationals and scored 44 goals in 57 full England internationals between 1959 and 1967. In the 1960–61 season he scored 29 goals against Wolves, Blackburn Rovers and Nottingham City; he also scored four goals against Newcastle United and Manchester City. Despite his goalscoring exploits, the club could manage only an 18th-place finish, three points above the relegation zone and three points below the Premier League relegation zone. The club could only manage only 18 points from 18 games in the 1959–60 campaign, five of which came in a 5–4 victory over Preston North End End. He ended the season as the club’s top scorer with 22 goals in 37 appearances, and scored five goals in a 7–2 win against league champions Wolverhampton Wanderers in the third match of 1958–59 season.

You want to know more about Jimmy Greaves?

This page is based on the article Jimmy Greaves published in Wikipedia (as of Jan. 03, 2021) and was automatically summarized using artificial intelligence.